... shadow person? Okay, maybe I am. But I won't admit that to the grandboys. 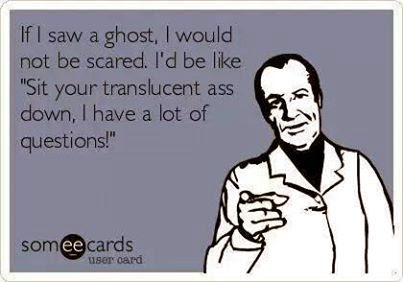 Lately, the oldest grandboy's been talking about ghosts. He doesn't like to go near windows at night. He likes to keep lights on. Being five, he can't really articulate what he sees.

But my adult daughter can. She finally admitted to me, after hearing about the grandboy's fears, that she's seen... something upstairs. Not quite a ghost. Shadows. Sometimes small shadows. Sometimes tall as a man. Only in passing, and not the typical Shadow Man who emanates malevolence and makes you want to pee your pants.

My youngest daughter has talked about ghosts since we moved here seven years ago, but it made no sense to me. (Also, she claimed our old house had ghosts in the basement but none of us ever saw anything.)  Our current house has had three owners - the man who built it, the couple who bought it from him, and us. No one has died in the house.

BUT (you knew that was coming, right?). That's not to say no one has died here. We live close enough to Gettysburg that this land could easily have been the site of a battle.

I've often glimpsed black shapes on the floor in my peripheral vision. Chairman Maiow is black, so I would turn, expecting to see him. Nothing.

A few years ago, something freaky happened to me with our dog Lily. I'd taken the grandboys out to play in the back yard and Lily began barking ferociously and charging at... nothing. Then, in a heartbeat, her barks turned to doggy smiles and she stopped at the edge of the woods, wagging away and dropped her stick as if she wanted someone to throw it. But (cue the spooky music) there was no one there.

I put it out of my head and passed it off as doggy weirdness. But now I'm not so sure.

So, anyone else dealt with harmless shadows? Any tips on how to live in peace with them? I can deal with them so long as they're not evil personified.

And hey, at least it's not a monkey man. The orchards border our back yard, and there have been Civil War-era tales of encounters with them.

And I'd still like to find a ghost in Gettysburg. But it can stay there.

I've never dealt with 'dark shadows', but I was approached by a white shadow, the figure of a woman, twice.

I was just a kid and it scared me to death. I was in bed when she appeared and I even put on my glasses to make sure I wasn't seeing things.

The second time she appeared, I asked her (politely) to go away and ended my plea with the sign of the cross.

She disappeared and never returned again. I often wonder who she was.

Anyway, it couldn't hurt for your daughter to try it. In my experience most ghosts are very accommodating.

That would be terrifying. I feel bad for the grandboys because they have no real understanding of death. If I make it sound like a game, they may try it. Thank you!

Sorry I don't have any good advice for you, except for- whatever you have been doing seems to be working out pretty well. It sounds like there has been a lot of ghostly/shadowy activity at your place. I am sorry to hear your grandson is nervous- I hope he will feel less scared soon. :)
~Jess

It is an unusual situation, Jess. I'm trying to reassure my grandson as much as I can, stay positive and upbeat so he doesn't pick up on any bad feelings from me. I'm not fearful, though, I honestly think they're just passing through once in awhile!

They say children can see paranormal activity often more than adults...we tend to close ourselves off to it, but children are more open. I know pets also tend to have that instinct. I have always thought it would be cool to live/spend the night in a haunted place, but I think if I ever did, I'd be so freaked out, I wouldn't be able to relax!

I've been on a few ghost tours hoping to see one, but I never do. I wouldn't want to spend the night with a poltergeist or unfriendly spirit! I can handle an occasional shadow though.