Congrats to Tom on his latest release! Help him celebrate by joining in the party.
Very cool cover, Tom! Wishing you many sales! 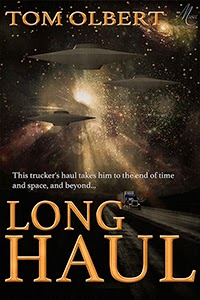 This trucker's haul takes him to the end of time and space, and beyond...


Take the wildest ride of your life!


In the near future, physicists have stumbled on a way to open rifts into other universes, making it possible to transport goods and people anywhere in the world in nothing flat.  The unscrupulous corporation that owns the new technology uses it to monopolize shipping worldwide.


Garth and Sally accept a shady corporate contract to deliver some unknown cargo to an alien universe, no questions asked.  It looks like an easy way to score big money.  But, things go south fast when their truck is hijacked by the beautiful and mysterious Keira Takahashi, and they find themselves pursued by hideous alien parasites in undead human bodies.


On the run and in danger, Garth and Sally find themselves on a crooked cosmic road leading to bizarre other worlds and exotic time periods.  They have one chance to unravel the company's twisted plot and save themselves.  Whether they succeed or fail may decide the fate of a universe...

Garth Jenkins is the kind of guy who just can’t stay out of trouble, as both his ex-wives will testify.  But, when trouble comes (and, to him, it always does BIG TIME) there’s no one you’d rather have in your corner.  Sally Drake has her hands full trying to keep Garth on the straight and narrow.  They fight over everything (including women.)  But together, they are an unbeatable team.  To hear Garth tell it in his own words:Excerpt:


Three suns burned brightly in the sky, the Earth was breaking apart, and giant moths were attacking us. For most guys, that would describe a bad dream after a bender, but when you’re trucking a load on the long haul, that’s business as usual.


A big mama moth was comin’ straight at me, and she looked pretty damn pissed. Wing spread of about fifteen feet, jaws bigger than my head. Yeah, that’s how big they grow in the crazy gravity in this parallel ’verse.


I squeezed the trigger of my flamethrower. A long, twisting stream of fire snaked out and nailed that sucker right between its foot-wide sparklin’ silver eyes. The shrieking noise those mothers make when they burst into flames cuts to the marrow and curdles the blood. Kinda like my ex-wife when I’m late with a payment.


It was still coming straight for me. I felt the fire on my face as it swooped in. Those things go up like freakin’ gas balloons, y’know. As it passed over, I held onto the rearview side mirror, crouched down on the running board, and nudged that big flaming bug with the muzzle of the flamethrower. It passed on over, stinking, singed pieces of it falling onto my hair and coveralls.


“Damn!” I yelled at the top of my lungs as the truck hit the guard rail, sparks flying, metal screeching. My feet slipped off the running board, and the rearview started coming loose in my hand. I looked down. My feet dangled over a damn long drop into a kind of island floating in mid-air, a jungle landscape splitting apart, volcanoes erupting and lava bubbling up.


There was nothing but sky all around, filled with other floating islands, and swarms of those moth things were taking off from them. Behind that, the moon filled half the sky. It looked close enough to touch. I held on for dear life as the rubber screeched over the tar. My trucking partner, Sally Drake, was spinning that wheel blind, trying to keep the damn rig on the highway. A highway that was built in mid-air, stretching out from one floating island to the next. Don’t ask me how. Our road crews just paved over old highways that were already there. Built by aliens from another ’verse, maybe. Or by humans from our future. I just drive. I don’t ask questions.

Thank you, Cate. And, the credit for the cool cover goes to Kelly Shorten of Musa Publishing.