Amy Burgess gets Beneath The Skin this Halloween!

Cate: Please welcome Amy Burgess to my special Halloween celebration. Amy, please tell us a little bit about yourself.
Amy:  Hi, my name is Amy Lee Burgess and I write paranormal romance. I love the supernatural element in novels.  I live in Houston, Texas with three dachshunds. I’ve published eight books so far – six novels in my wolf shifter series, the Wolf Within, and two in my vampire series, The Circle.  I can speak French (badly), love to travel, and autumn is my favorite season.

Cate: Mine too! What do you love most about Halloween?
Amy: Carving my jack o lantern on Halloween night surrounded by candles and incense and Halloween decorations.  I love the idea of Halloween – people dressing up in costumes and going out into the darkness!

Cate: Do you have a favorite memory of a Halloween past?
Amy: I’m glad you asked this!  My father loves Halloween too and for years he dressed up as Frankenstein and helped out at a local haunted house run by a couple I’ll call Mr. and Mrs. M.  For Halloween they opened their house to neighborhood children to tour.  They even had owl wallpaper in the living room.  When I was little I would go to the haunted house and brave the stairs to go visit the wicked witch, but when I got older I actually got to help haunt the house. I was always a vampire in a long white nightgown with blood dripping down my chin. I’d hide in a real coffin in the dining room and when kids would knock on the wood, I’d knock back from the inside and they’d scream!

Cate: Have you ever had an unusual experience you couldn’t explain?
Amy: One time I was visiting a supposedly haunted plantation in Louisiana.  As I walked around the grounds waiting for my tour to start, I looked up at one of the windows and saw a little boy waving at me.  He was standing between the window shade and the glass and I wondered why his mom was letting him touch the shade.  I figured he was on the tour before mine.

During the tour we found out about how a slave woman had poisoned a birthday cake that the lady of the home and three of her children ate. She wanted them to get sick so she could nurse them to health again and be in good favor with the plantation master.  Only the lady and two of her children, little boys, died, and the slave woman was hanged.  Her ghost supposedly haunted the plantation.

The tour went through most of the house, but we didn’t go into that area of the house where I’d seen the little boy. When the tour ended I asked the guide why we didn’t go that area.  She told me it was the B&B part of the plantation and people stayed in those rooms. “Ah,” I said. “That explains why the little boy could touch the shade and not get in trouble.”  The guide asked, “What little boy?”  I told her what I’d seen and she said, “There are no children staying here this weekend.  Can you tell me which window he was in?” I told her and she said that was the nursery window where the two little boys died.  Had I seen a ghost?

The best part of this story is that three years later I was back in that little town staying at a B&B near the plantation.  At breakfast I was talking with a mother and her daughter who had just visited this plantation the day before.  And the daughter said, “We think we saw a ghost!  There was a little boy waving out the window of what was once the nursery!”

I had not told them my story, but when I did tell them, the whole table got very silent and I know a shiver went down my spine!

Cate: What frightens you the most?
Amy: The dentist.  Ugh.

Cate: Ever gone on a ghost tour? Or ghost hunting on your own?
Amy: I lived in New Orleans and I went on a lot of ghost tours.  I never saw a ghost though, except for the little boy at the plantation house.

Cate: Any favorite Halloween recipes you’d care to share?
Amy:  I love pumpkin seeds, so here’s a recipe I use:

Preheat your oven to 300 degrees.
Seed your pumpkin and put the seeds into a colander and rinse under cold water.
Shake them dry and spread them on an oiled baking sheet and roast them for 30 minutes.  This will dry them out.
Next, toss them olive oil and salt (sometimes I toss them with cinnamon and sugar instead for sweet seeds) and return to the oven and bake for about twenty minutes or until they turn crisp and golden.

Cate: Tell us about your latest release, and where readers can find it online.
Amy: I’m going to talk about my first book in the Wolf Within series because the series is going to print this month and I’m excited.  I hope to interest some new readers!

Beneath the Skin is about a wolf shifter named Stanzie Newcastle. She’s gone to a Great Pack Gathering in Paris to find a new bond mate after living on her own for two years. Her former bond mates, Grey and Elena, were killed in a car crash and Stanzie was driving the car.  She’s been away from the Pack and wants to reconnect.

In Paris she meets the mysterious and haunted, Liam Murphy. His bond mate died three years previously when she fell down the stairs and broke her neck. He’s also been living away from his pack in exile. His pack convinced him to come to the Gathering. They want him to find a new bond mate but he is SO not interested.

Then he and Stanzie are thrown together by a murder at the Gathering. Stanzie’s a suspect, but Liam is convinced she’s innocent.

Buy links are here: Beneath the Skin

Cate: Care to share a blurb or excerpt?
Amy:  Here’s the scene where Stanzie reacts to the death of the murder victim.
*** 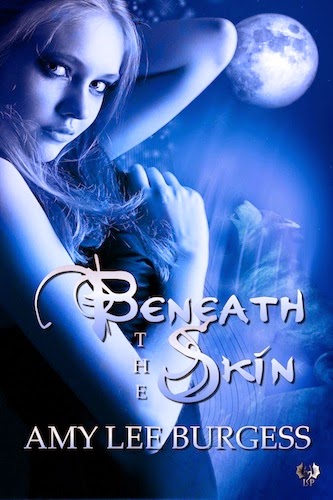 “Stanzie,” Rudi gasped, his eyes locked pleadingly to mine. Then he died.
The light left his eyes. Something bright and essential leaped from his still body and dissipated into the nothing.
His body convulsed, his fingers slackened and his arms fell to his sides. His eyes—his empty eyes—stayed open. But he saw nothing.
“Rudi?” I choked out. My disbelieving hand reached out to touch his face and my fingers communicated the truth to my stuttering brain.
I screamed then. I screamed and couldn’t stop because this was not happening. This was not real. It was a nightmare and if I screamed loud enough I would open my eyes and be in my little single bed in the Paris hotel. The day would just be starting, it would not be ending. Not this way.
The screen collapsed when I blundered into it, as I shrieked both his name and my wordless horror.
Somebody grabbed me, forced me down to the ground and I struggled, kicking and clawing, but he was stronger.
“Stop. Constance, stop screaming. Stop screaming right now!” There was an Irish lilt in the man’s voice, more Irish than he’d sounded the night before when I’d met him. He was scared too but in way more control than I was.
“You’ve got to stop screaming and tell me what happened!” Liam Murphy had lipstick on his cheek. His white shirt was half unbuttoned. His hair was tousled as if someone had passionately run her fingers through it. He hadn’t shaved and my scrabbling fingers rasped against the stubble on his cheeks and chin.
“He’s dead! Rudi is dead!” I screamed at him. I hit out at him, tried to hurt him because Rudi was dead and there was nothing I could do about it.
***

Cate: What inspired you to write about the theme?
Amy:  Beneath the Skin was a NaNoWriMo novel.  I didn’t know what I was going to write about, just that I wanted to write about a wolf shifter named Stanzie.  So this novel was completely and utterly pantsed and any themes it contains were not planned!

Cate: Yay, Amy has a giveaway for you guys! Be sure to leave your email address with your comment.
Amy:  I’d love to give away an electronic copy of Beneath the Skin to someone who tells me why they like wolf shifters in the comments.

Cate: Thanks for joining the party, Amy! Happy Halloween!

Email ThisBlogThis!Share to TwitterShare to FacebookShare to Pinterest
Labels: Amy Burgess, Beneath The Skin

Great interview! Amy might already know I like wolf shifters, but other kinds of shifters too. Wolves are such wonderful creatures - simple yet complex - coupled with humans and the scope for characterization is amazing. Good luck with your new book!

What a fun interview. Loved your ghost story, Amy. Gave me the shivers. I've also gone on a Haunted New Orleans tour. It was lots of fun.

Thanks Wendy and Gemma, for your comments. Wendy, I'll be contacting you and sending you a copy of Beneath the Skin! I hope you enjoy it. The series is going to print soon and the seventh novel is out in December!

Thanks, Cate, for this opportunity to talk about Halloween! It's my favorite holiday of the year!