Cate: Woo hoo, Nerine Dorman's traveled halfway around the world to appear at my special Halloween celebration. Welcome Nerine! Please tell us a little bit about yourself.
Nerine: Thank you for having me over, Cate. In short, I’m a South African author of dark, speculative fiction, I’m on half of the gothic folk band A Murder and occasionally I edit fiction.
Cate: So cool! What do you love most about Halloween?
Nerine: The best part of Halloween is that it’s the time of year that we have the South African HorrorFest, for which I run its literary component – the Bloody Parchment event. We get to dress up and read scary stories, and eat lots of cupcakes. 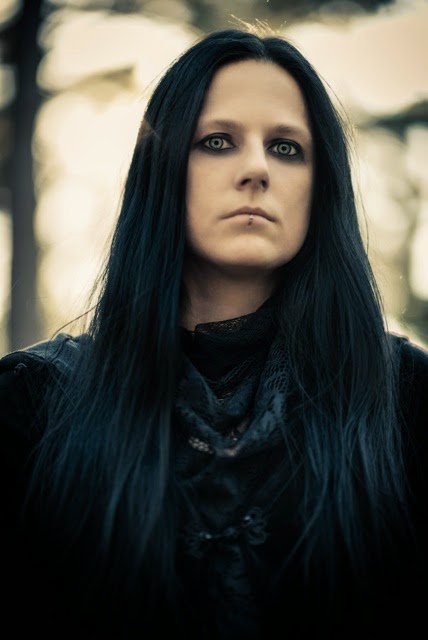 Cate: A Bloody Parchment event sounds like fun! Do you have a favorite memory of a Halloween past?
Nerine: Probably amusing rather than favourite. We learned about Halloween watching American TV series and films, but the concept was foreign to a lot of the older adults. You see, TV only came to South Africa in 1976, and Halloween had never really been part of our culture. We decided to dress up and go trick or treating, and very few of the adults knew what we were up to. And even less of them had candy for us. Now it’s totally different, of course, and many people have sweets and chocolates for kids, who often go to great effort to dress up.
Cate: Have you ever had an unusual experience you couldn’t explain?
Nerine: Oh, many. One of my favourites was when my parents were ghost hunting, and neither my dad or myself particularly cared for the house, which had a weird vibe in the lounge. My dad was sensitive to these things, and to a certain extent, so am I. So we went outside, and a few moments later my mom came rushing out of the house saying she’d seen a ghost. I of course thought this was terribly funny, so I went to go tell my dad, that Mom had just seen a ghost. And he calmly asked “Which one?” At the time I hadn’t realized there’d been more than one.
Cate: Lol! Sounds like your dad's quite used to them. What frightens you the most?
Nerine: Losing control of my body. I’ve had a seizure while using public transport a few years ago. Of course my memories of the actual chain of events are like Swiss cheese, and not being able to recall what happened really bugs me. So yeah, losing one’s mind features pretty high up on my list of fears. Of course the usual applies: fear of spiders rates pretty highly. Oh, and stink bugs too. Don’t like them at all.
Cate: Yikes, that would be scary. Stink bugs are too prevalent here, but my daughter shares your fear. Ever gone on a ghost tour? Or ghost hunting on your own?
Nerine: I love old, abandoned buildings. Sometimes I gain impressions from them. Whether this is my overactive imagination or actual tapping into resonances I don’t know, and at the end of the day it doesn’t really matter, because it’s fun to think up possible stories.
Cate: I agree! Any favorite Halloween recipes you’d care to share?
Nerine: If I’m feeling particularly wicked, I’ll chuck a bunch of fruit and chocolate into a baking dish, cover it with an egg/flour/yogurt mix and bake that for 45 minutes and serve up with cream or ice cream. 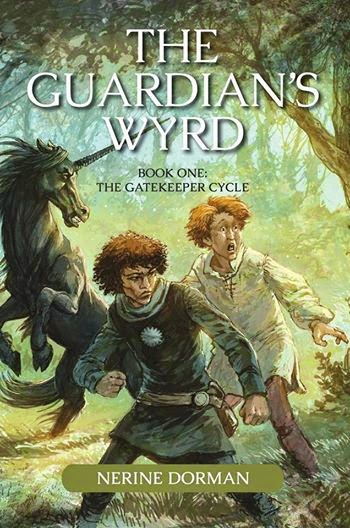 Cate: Yum, sounds delicious. Tell us about your latest release, and where readers can find it online.
Nerine: I’ve actually got two that came out on each others’ heels. The first is The Guardian’s Wyrd which is a fantasy adventure for boys between the ages of 12 and 16 (but really, anyone can read it); and the other is a dark fantasy novel entitled Dawn’s Bright Talons which should appeal to fans of Anne Rice. Yep, it has vampires.
Cate: Care to share a blurb or excerpt?
Nerine: They are as night to day–but blood will tell when facing a common enemy.

A sought-after dancer in the upmarket Moonlit Garden, Isabeau Letier, has not given her future much thought. All that matters is the art of dance, and charming wealthy patrons into parting with a few extra coins. She has her exotic good looks and her youth. What could possibly go wrong?

When a mysterious nobleman pays her undue attention, Isabeau’s darker, bloodthirsty nature awakens and she kills him with her bare hands after he follows her home. Even worse, she drinks and enjoys his blood. Her brother, Eric, returns home to this disturbing tableau yet remains calm even as the corpse sifts to ash in the morning sun. Isabeau has no choice but to follow her sibling’s lead.

Not many people know that Michel Roux, owner of a slightly down-at-heel theatre in the District of Paper Lanterns, is a vampire. He prefers to keep things that way and steer clear of the petty politicking of the city's vampiric subculture. When his estranged sire, Tomas, goes missing, and his grandsire sets him the task of solving the mystery, Michel is unwillingly dragged into all of the very dangerous games he thought he’d left behind him.

Isabeau and Michel become unlikely allies as they try to wriggle their way out of being the pawns in a game where they don’t know the rules. Isabeau’s ancient heritage is a danger, not only to herself, but to the established hierarchies at odds with one another in the city of Ysul, and the elders are desperate to either control her–or kill her.

As events unwind, it becomes increasingly difficult to separate friend from foe, and as the two flee for their lives they must also explore the true nature of the bond that they've forged and uncover the ages-old secrets that have pushed them onto this path. Warring factions are about to overturn centuries of custom, and two young people are marked to pay the price—in blood. 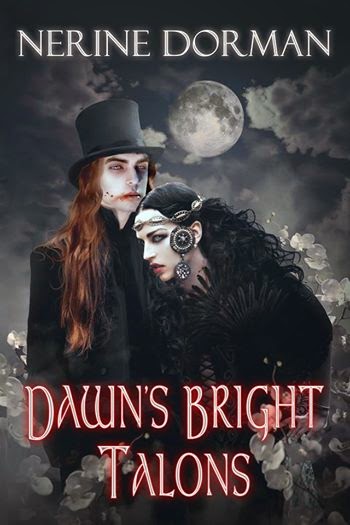 Cate: What inspired you to write about the theme?
Nerine: I have this awful habit of asking “What if…” and it’s all downhill from there. With The Guardian’s Wyrd I had a yen to write about a house that I used to frequent when I was a kid in Hout Bay. It had a mysterious basement, and we always used to pretend there were secret rooms there. With Dawn’s Bright Talons, I just got a real kick out of playing on the idea of what if there was a kind of predator that hunted vampires… And what if she had no idea of her heritage until it was sprung upon her.
Cate: A secret room would be very cool. Anything else you’d like to share?
Nerine: Folks are welcome to sign up for my newsletter (http://eepurl.com/JoPUv). I promise not to spam people and to keep things light and entertaining, with a bit of writing advice thrown in from time to time too. Otherwise they are welcome to stalk me on Twitter at https://twitter.com/nerinedorman

Cate: Nerine has a fantastic giveaway for you guys!


Nerine: I’m giving away a digital copy of Dawn’s Bright Talons to the first three people to sign up for my newsletter.

Cate: Wow, three ebooks. Thanks Nerine! And thanks for helping us celebrate Halloween!