Cate: What do you love most about Halloween?
Rebekah: What don't I love? Halloween is my favorite holiday ever! I go all out with decorations and costumes! I love the spooky, creepy, cosplay fun of it all!

Cate: A woman after my own heart, lol Do you have a favorite memory of a Halloween past?
Rebekah: Hmmm… I don't know. I love all Halloweens. I think the last few have been my favorite because I haven’t had any sick kids and we've gotten to go around trick or treating with great friends and just have fun.

Cate: Have you ever had an unusual experience you couldn’t explain?
Rebekah: Yes, but not on Halloween. I was driving from Utah to Idaho in the middle of the desert and suddenly out of nowhere, with no sound at all, a bright light shone through my sunroof, like a search light and then it vanished. It was super creepy!

Cate: Yikes! That does sound creepy. What frightens you the most?
Rebekah: Spiders and bugs. And I'm not a fan of horror movies that are people being mean and sick to other people. That frightens me most. Give me Vampires, Werewolves and Zombies any day of the week! It's people that scare me most.

Cate: Ever gone on a ghost tour? Or ghost hunting on your own?
Rebekah: Nope. No thank you! I watch Supernatural and that is as close as I'll ever get to ghost hunting!

Cate: lol Any favorite Halloween recipes you’d care to share?
Rebekah: I have seen so many cute ones on Pinterest. I really like to make sluggy looking punch with floating eyeballs. And I like making chocolates that look like witch fingers and skeleton fingers. Those are fun.

Cate: Tell us about your latest release, and where readers can find it online.
Rebekah: My latest release is Snow the Vampire Slayer. It came out on Sept. 22nd. It is the second book in my Fairelle Series. A series of fairytale retellings. The first award winning book in the series Red the Were Hunter, released in April. Snow Gwyn is the sister of seven Vampire Slaying brothers. Sage is the deposed vampire prince in exile. Two people who should hate each other can't help but fall in love. It can be found on: Amazon, BN, Kobo & ARE

Cate: Care to share a blurb or excerpt?
Rebekah:

Snow stepped outside and the hairs rose on her neck. A feeling of being watched overcame her. She wasn’t alone. In the two years she'd been coming to the cabin she hadn’t seen so much as a squirrel at night. The grasslands of her home were relatively sheltered from the wildness of Fairelle.
Her gaze swept the wooded area for predators. She dashed for the glade, and retrieved her sword, her palm burning where she grasped the hilt. 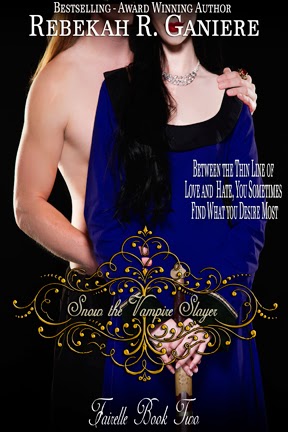 "Who's there?" she called.
No answer.
A chill ran down her spine and she swung the other direction. She should've brought her bow. Had Father taught her nothing?
"I know you're out there. Show yourself." Adrenaline coursed through her at the prospect of an imminent fight. Her heartbeat quickened and her skin flushed with heat. Her fingers twitched and her gaze swept the area.
A rustle in the trees by her cabin caught her attention and a tall, well-built man stepped out of the shadows.
"Who are you?” She pointed her sword at him. “What are you doing in my glade?"
"Your glade? I was under the impression that this glade belonged to no one."
She swallowed hard. Legally this was not her land, but by rights of her having claimed the abandoned cabin, this was practically her own backyard.
"Why are you out at such an hour, girl? Should you not be at home in bed, instead of playing swords?"
"I am no girl. And I have trained with swords since I was young. Besides, what matter is it to you what I do?" Who did this man think he was talking to her the way her brothers would?
The man shrugged and moved closer still. "True. It is not my business what you do. But what kind of man would I be were I not concerned for the wellbeing of a lovely maiden, alone, in a glade, near dawn?" He brushed his long, blond hair from his face.
He'd called her lovely. Her cheeks heated and her heart thundered in her chest as he circled her. It had been a long time since a man had called her lovely. His tall, broad-shouldered frame moved with the precision of a cat.
He stopped and examined a dummy. "What are you doing out at this hour?" he asked again.
Thoughts of secret rendezvous and kisses in the moonlight flitted into her mind. She shook her head. She retreated a step. What was she thinking? She was far from home and her brothers were unaware she was gone. Her loneliness must run deeper than even she knew to be thinking such things.
He glanced at her, his bright blue eyes flashing in the moonlight. "Did you make these?"
She squared her shoulders. "What if I did?"
"Impressive. For a lady." He poked the dummy in the face. "Personally, I like to stroll at night, when everyone still sleeps. It's like seeing the world as it was meant to be."
Her sword drooped a fraction. He felt the same way?
"You should go." She raised her sword again.
He watched her with an intensity that made her shiver involuntarily. She backed up a pace. Midnight rendezvous were fanciful in storybooks, but in real life they rarely ended well. Trusting a stranger was not only reckless, it was stupid, and she wasn't stupid.
"I'm not going to hurt you, love." He put up his hands and smiled. His pearly white teeth shone.
"Don’t' call me 'love'."

Cate: Love it :) What inspired you to write about the theme?
Rebekah: I've always love fairytales from the time I was young. The brothers Grimm were truly amazing writers. About 10 years ago there was a miniseries called The 10th Kingdom and in it all the fairytales lived in adjoining kingdoms. I thought that was such a cool idea, so that's what sparked the idea for the nine book series.

All of my characters live in Fairelle and they all know each other through one connection or another. Sage the vampire prince from Snow the Vampire Slayer was in the first book Red the Were Hunter. Belle, from Belle and the Beast, which is book 5, is best friends with Snow from book 2. Cinder The Fae, which is book 4, has known both Snow's family as well as characters from later books for a long time as well. So it was a lot of fun to come up with that.

Cate: Very cool. Anything else you’d like to share?
Rebekah: It was great to be here! Thanx so much for having me and keep an eye open for my first Novella in the Fairelle Series releasing on my birthday Dec. 3rd J

Cate: Thanks for joining the party, Rebekah! Hope you and your family have a fun Halloween!

Had to look up SAHM. I imagine writing would be a good way to earn money from home if your kids are quiet enough.