Cate: Please welcome V.S. Morgan to my special Halloween celebration. V, please tell us a little bit about yourself.
V.S. Morgan:  I grew up in Oregon but have lived in Minnesota for the last 16 years. I’m married, and we celebrate our 20th anniversary next June. With hubby, son, and pets who are all male, I’m the queen of my home.  I enjoy nature, reading, and music. I work full-time as a Project Manager.

Cate: What do you love most about Halloween?
V.S. Morgan:  Halloween is magical. As a kid, it was the only time I could out and about after dark and for one night I could be anyone or anything I wanted. As an adult, I love decorating and seeing all the kids’ costumes as they trick-or-treat and checking out the houses that are majorly done-up. Halloween always makes me happy.

Cate: I completely agree :)  Do you have a favorite memory of a Halloween past?
V.S. Morgan:  There isn’t one that stands out in particular. Loved them all for different reasons.

Cate: Have you ever had an unusual experience you couldn’t explain?
V.S. Morgan:  The night my great-grandfather died, I saw a shimmery image of him in my bedroom doorway. I didn’t even know he’d died until the next morning. To this day I believe he was saying goodbye.

Cate: So sweet, and sad. What frightens you the most?
V.S. Morgan:  Clowns freak me out.

Cate: *shivers* Ever gone on a ghost tour? Or ghost hunting on your own?
V.S. Morgan:  I visited the Yaquina Bay Lighthouse in Oregon which had a ghost story associated with it. A teenager was murdered by pirates. Her body was never found because there was a secret passage but a long blood smear on the floor had been found. We went on the tour, and I bought a small book and read it over and over. Gave me the chills. I believe that story has been debunked but was still fun. Would love to visit more spooky places.

Cate: Very spooky! Tell us about your latest release, and where readers can find it online.
V.S. Morgan:  Hunter’s Mark is an interracial paranormal (shifter) story about an assassin who realizes his latest assignment violates his rules, so the hunter becomes the protector. It was a really fun story to write. 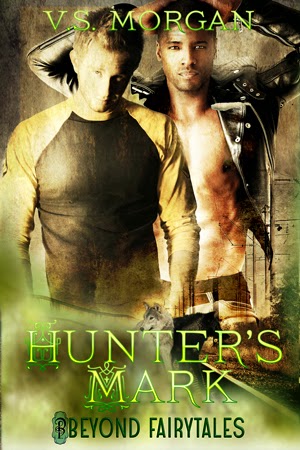 Artist Casey Smith lives a quiet life, under the radar of his enemies, until one fateful night he loses control and the astonishing image of a wolf racing down a suburban street splashes all over social media.
Hunter’s bullet never misses its target. The assassin seeks out and kills his prey with a clear conscience by following two simple rules: 1) Don’t kill innocents 2) Don’t kill shifters.
Realizing his latest assignment violates those rules, the hunter activates Princess Protocol and the assassin becomes the protector. Red hot attraction flares between the hit man and his former target. Can Hunter resist the sweet shifter in his care?

Excerpt:
He stepped closer to Casey’s stall but stumbled over something small and furry. The toe of one Birkenstock caught on a clump of grass as he attempted not to trample the little beast, and he ass-planted with said beast jumping onto his chest to give him a broad doggie smile.
His buddy laughed piss-your-pants-hard in his ear. F**k a duck.
“Miss Priscilla!”
The target he’d worked so hard to observe remotely sank to the ground between his sprawled-out legs, peeling the tiny hairball off his chest and setting it on the ground.
“I’m so sorry! Are you okay?”
Big blue eyes fringed with long, pale lashes scanned his body while strong yet gentle hands moved over his ankles and legs, searching for an injury. Oh, a toucher. His wolf basked in the tactile attention. His breath hitched as those hands glided past his knees and skimmed his thighs.
Damn, he needed to get laid after this assignment.
“Oh, my, what a li’l sweetie. Look at those freckles! I wonder if he’s got them everywhere. I’d like to lick them,” Rex crowed in his ear.
He growled.
The other man chortled. “Possessive, much?”
He inhaled deeply, only to be slammed with the force of a Mack truck. Strawberries on a warm summer’s day and fresh-cut grass—s**t, his target smelled delicious. He took another breath, and his brain reeled. He’s a wolf shifter, too? F**k.
Casey’s brows furrowed. “Where are you hurt?”
He forced a smile. “I’m fine. No worries.”
Casey returned the smile, his wide and high beam combined with sparkling eyes. Hunter stared as warmth wrapped around him like a blanket. He had no ammo against such a happy, open expression. The guy freaking glowed.

Cate: I love reimagined fairy tales. :) What inspired you to write about the theme?
V.S. Morgan:  Decadent Publishing had an open call for re-tellings of fairytales. In order to avoid a hundred Cinderella stories, they randomly assigned stories. My assignment was Grimm’s “The Skillful Huntsman.” It was a blast to twist it into my own version.

Cate: Woot! V.S. has a fantastic giveaway for you guys!
V.S. Morgan:  I have a Rafflecopter giveaway $20 Amazon Gift Card

Cate: Thanks so much for partying with us, V.S.! Hope your Halloween is spooktacular!

Thanks for hosting me, Cate! Love your site! A fellow Halloween lover is a great thing!

I'd never heard of the fairytale your story is based on. That Princess Protocol is mighty handy.

I don't really have a favorite fairy tale. My parents didn't really read to us so I kind of bypassed the whole thing and there weren't the plethora of Disney movies in the 60's that there are now. The first time I can remember seeing Snow White (even though it was released in 1937), I was 13. It was memorable because my 3 year old sister stuck a green tic tac up her nose and it started to melt and I thought she had a nose bleed in the dark theater. Hee, hee, hee. I'll have to bring that up again when I see her this Sun.

Hi Anne! It was new to me as well. LOL, thanks for the story. Very funny.

Yep, it's my second-favorite holiday, V.S. :) Glad you could join the party!