D.L. Jackson will rock your holidays!

Cate: Your stories are real grabbers. What do you love most about Christmas?
D.L.: Having my family around. This will be the first Christmas, (both my boys are in the military) where my boys won’t be home. One is deployed, the other on alert. After that, it’s the smells. The pine, the baking sweets and breads.

Cate: Hope you're all celebrating again together soon. Do you have a favorite memory of a Christmas past?
D.L.: Hard to pick, but I think about 24 years ago, when I was in the Army and my husband was deployed to the Gulf War. I was pregnant with my first and I got a call home. We didn’t have skype and phone calls were rare, something like twenty dollars a minute. Mostly I got letters, but the call was real special. I was alone for the holiday, since I was too far along to fly home out West.

Cate: How sad! If Santa could grant one wish, what would you ask for?
D.L.:   I’d have my boys home for Christmas this year.

Cate: What was the best gift you’ve ever received? What made it so special?
D.L.: That phone call. Nothing like your sweetie calling you when you need them most. :)

Cate: Aw, how sweet. Any favorite Christmas recipes you’d care to share?
D.L.: Ahaha, well, if I wrote them down I would have one. I don’t use recipes often. Try these no bake cookies. We lost power this Thanksgiving and we ate what I could cook on the gas stovetop.

2 cups of sugar
4 tablespoons of cocoa
1 stick of butter
1/2 cup of milk
1 cup of peanut butter
1 tablespoon of vanilla
3 cups of oatmeal (I like the quick oats)
Waxed paper
In a heavy saucepan, bring to a boil the sugar, cocoa butter and milk. Boil for one minute and then stir in the peanut butter, vanilla and oatmeal. Drop onto wax paper covered cookie sheets and let the cookies set. They’re quite yummy and great to make with kids.

Cate: My mom used to make these cookies! Tell us about your latest release, and where readers can find it online.
D.L.: I have an upcoming release that is available on preorder now. Black Hills Desperado. It’s the third book in a brand new Decadent series that will be available starting in January 2015. Here’s the link for preorder: Black Hills Desperado Preorder from Amazon

Cate: Care to share a blurb or excerpt?
D.L.: 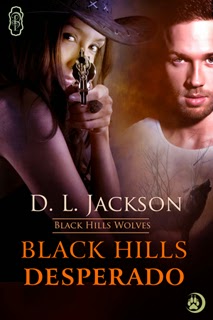 She’s a bad girlfriend.
Nothing Xio Davis does is right. When she abandons her pack, riding out of town on the back of a stranger’s motorcycle, she finds she’s bitten off more than she can chew. First, it’s small-time crimes, then bank robbery. As Xio sinks into the criminal underworld, the FBI catches up with her. Now, she’s got one way out: snitch.
When Xio turns state's evidence against a Mexican drug lord, Agent Marcus Cazador steps up to take her home, giving up his career, his place in the El Paso pack, and all he knows to protect her.
Xio claims she’s not the same wolf who left ten years before, but can she convince Marcus she’s changed her wicked ways? Or will the Black Hills be the end of the road on her long journey to redemption?

Cate: I was lucky enough to read a draft - great story. What inspired you to write about the theme?
D.L.: The new series is a shifter series. I wanted to have an Asian wolf. Actually I have two stories. I’m working on Xio’s brother’s story now. Anyway, I wanted a different kind of shifter, not only her ethnic background, but her character. Xio is a bank robber.

Cate: Anything else you’d like to share?
D.L.: This series is amazing. There’s a fantastic list of authors participating. If you love shifter books, this is a series to consider.
Have a wonderful Christmas and don’t eat too many no-bake cookies. They are addictive.

Cate: I agree, lol. Hey, D.L. Has her Santa hat on, you lucky peeps!
D.L.: I’m giving away one of my backlist Decadent titles to one lucky commenter.

Cate: Thanks so much for being part of the 12 Days of Christmas! Hope you're able to see your boys, if only through Skype.
D.L.: Thanks for having me, Cate.

Cate: And thanks to everyone who's joined in the holiday party. Hope you've had as much fun as I had.
Posted by Cate Masters at 1:00 AM

Good luck with your books, DL. I wish I could grant your wish to have your boys home for Christmas.

I have never heard of no bake cookies- but they sound yummy. :) Best of luck to DL!
~Jess

Thanks for having me, Cate. I wish you could too, Susan. Next year. :)
Yes they are yummy, Jess. Give them a try.