A Dangerous Affair in Venice - anthology of Cursed, Charmed, Claimed 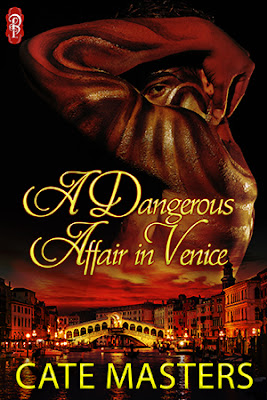 He's lost everything... except her
From beasty man, bitter and lonely, Bruno diCesare's transformed by Melina’s love. Fire destroyed his  quarters, and everything he loved. But his love for Melina is stronger. So strong, it threatens to blind him to danger.
She's given up everything for him...
Melina Weaver also transforms—from shy, bumbling scientist... to student of magic... to powerful fire mage.  She has no money, no job, nowhere to go--and she doesn't want to. Bruno is her life now, but his world threatens to destroy them.
Their only hope? To join with the rogue magicks and overthrow the Council's dictatorship.
If they survive the battle, will they be able to create a new world for themselves?

This book was awesome – The Jeep Diva

Cate Masters did a fantastic job of writing in this novella.  I was very impressed with how she was able to create such vivid and beautiful scenes – Bitten by Romance

"...a spellbinding tale of love, mystery, suspense and intrigue like no other.
These books had me from the first chapter and I couldn't put them down. Paranormal romance has met its match with these books and the history that is wound within the story sets the tone for what the underside of Venice is for those of magical persuasion." – Sarah Says Read Romance

I really recommend this series. A bit of ole lore and set up in today's society really makes this story ( series) wonderful!! – Julie’s Books Reviews

Excerpt
Light danced in his dark eyes. “I must admit, your fire dancing fascinated me. What made you choose such a dangerous skill to master?”
“The thrill of the challenge, I suppose.” It balanced the rest of her mundane life, to a degree. Mastering each new level gave her a sense of achievement, where work couldn’t.
Something flashed through his dark eyes. “Mistakes must be very painful.”
“I practiced a long time before I worked up the nerve to actually light the wands. I found the fire great incentive to focus, however.” God, her grin must be goofy, the way he stared. Such gorgeous eyes, such a deep brown they almost appeared black. He probably had rugged features, if his large hands provided any indication. Too bad he wore gloves, another barrier between them.
“Yes,” he said, “I imagine so.”
“What about you? What other magic do you know?” Oh please, can you get any more ridiculous? It sounded like a line from a bad chick flick.
The crinkle around his eyes was the only evidence of his smile, but enough to charm her.
“Lifetimes of studying the dark arts have provided me with many tricks.”
“Lifetimes?” she blurted.
He stiffened in her arms. “Pardon?”
She watched him carefully. “You said ‘lifetimes’. Plural.” And what the hell did he mean by ‘dark arts’?
Rigidity masked the grace of his movements. “I’m sure you’re mistaken.” He stared over her head as they whirled to the song’s rhythm.
Mistaken my ass. How very strange. More strange that the question upset him. He’d clammed up, and his muscles were so tense, she expected him to bolt. Better to drop it. For now. “Must have been a slip of the tongue.”
“Yes.” Relief sounded in his tone, though guarded.
This man had something to hide. How intriguing.