Brynna Curry shares her spooky past and latest release!

Cate: Brynna Curry’s here today! Welcome, Brynna. Please tell us a little bit about yourself.
Brynna: I’m from a sleepy lake-side town in northwest Alabama. I live deep in the woods with my children and kitty cats for company. I write happy-ever-afters with a paranormal romance or  romantic suspense twist. 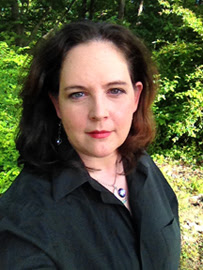 Cate: Very cool. :) What do you love most about Halloween?
Brynna: Halloween is my favorite holiday. It’s the one day a year where anyone can be any crazy insane thing they can dream up. Imagination reigns as king and everyone is young at heart.

Cate: If only every day were like that! Do you have a favorite memory of a Halloween past?
Brynna: I think my favorite would have to be my first Halloween as a mom. My husband and I took our son L.J. trick or treating to just family members houses so they could see him all dressed up in his ghost outfit. He was seven months old. We were dressed up in 50’s style.

Cate: Aww. Kids always make Halloween more fun! Have you ever had an unusual experience you couldn’t explain?
Brynna: When I was twelve, My father had been in between jobs. He couldn’t find work in where we lived, but had been offered a position as band director in Waynesboro, Tennessee, so we packed up and moved again. We rented this big white farmhouse with an attic. This place was seriously creepy.

About six miles from the center of town, the home was surrounded by pastures and woods and featured a wrap around porch with a big swing shaded by an old magnolia tree. My parents left me to my own devices most of the time and I would often stretch out on the porch-swing with a book and my cat, Panther. It felt like the safest place in the house.

Our landlord told us no one had lived there since her father had died in his study. She kept the door locked to the room and told my parents it was completely off limits. No one was allowed in there, as her father’s things were as he left them. Now to a very curious child that’s like waving a red flag in front of a bull. So I discovered one of the blinds had a few slats missing. From the screened in porch, I peeked through the window only to find a room with old furniture, dust and black stains on the floor by the desk. Just a room. Nothing special except every time I looked in that window, something had been moved.

Over the months we lived there, I was always on edge. The attic and parlor were other ‘off limits’ zones, at least for me. I could not be in those rooms. The smell of the air, the heaviness of the atmosphere freaked me out, but only me. It never bothered anyone else, well except for the cat. Even now I get bad vibes thinking about it. She would run across the doorway to the foyer to get in my room and never would venture into that part of the house. We often heard scraping, bumps upstairs that had no explanation. The attic had no floor. So how could something move across it?

Then one night, there were severe thunderstorms. Drenching rain, lightning, and thunder. At exactly 9:04 p.m. (I can clearly remember the time. Strange because I was born at exactly that time of night.) the power flickered then went out. Panther, who always slept at the foot of my bed, started shrieking eerily, a weird mewling sound, and crawled backwards from the end of the bed, never taking her eyes off the window, then flattened herself on my chest, right over my heart. She kept staring out the window at something in the rain. I looked towards the windows and there in the rain stood a man. He had scraggly gray hair, was wearing a black quaker looking hat and a dark coat. It was pouring rain but it seemed to fall around him, not on him. His eyes were startling blue and terrible. Almost neon blue. Even now, I can see his face.

I couldn’t breathe. I was terrified. It seemed as if he were there to hurt me, but could not come through the glass. Panther’s screech seemed to scare him. We sat locked that way for a full minute before the image vanished, the cat calmed and the power flicked back on. There was no one there. The next day I gathered my courage and checked the ground (I was that kind of kid) which was mushy from the rain but there were no footprints…none. Have you ever been so scared you couldn’t scream? Yeah. No one will ever convince me that she wasn’t my protector that night. I don’t know what that thing was. A demon? Ghost? My imagination? Who knows.

Cate: Yikes! What a truly scary story! In general, what frightens you the most?
Brynna: Losing someone I love.

Cate: Ever gone on a ghost tour? Or ghost hunting on your own?
Brynna: Never. I’ve lived in too many spooky houses for it to be fun. lol 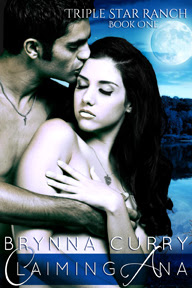 Cate: Sounds like it! lol But now for the real treat! Tell us about your latest release, and where readers can find it online.
Brynna:  My latest release is Claiming Ana. CA is a prequel novella set in the story world of my Triple Star Ranch series. With three additional books planned for this series, CA is more of a prequel and does not resolve the arcing storyline of Sam Murphy’s murder. While that part of the story is a cliffhanger, the whirlwind romance between Ana and Howl is resolved in this book. I’m currently working on book two Tempting Taylor.
You can find Claiming Ana here. AMAZON   BARNES & NOBLE   ITUNES   ALL ROMANCE    KENSINGTON

Cate: Care to share a blurb or excerpt?
Brynna: Blurb: “I’ll take you, turn you, until I’m the sun that warms you, the moon that calls to you at night.” – Howl Raven

Where there’s smoke, there’s fire…and passion that won’t be denied.
The child of a gypsy and fey, small-town veterinarian Dr. Anastasia Brannon has always hidden her magic for fear of ridicule. A red-hot encounter with the new PI in town makes their attraction impossible to deny. Throwing caution to the wind, she indulges her desires but keeps her secrets close.

A man with a shady past and secrets of his own, Howl Raven uses his feral talents and tracking skills to make a living, doing his best to lay low and hide the curse that haunts him every month. So far, so good…until an uncontrollable shift outside the full moon leaves him the victim of a werewolf hunter.

When she finds the enigmatic investigator wounded in the woods near her cabin during a storm, Ana provides medical care on instinct. She may be the only one who can banish the wolf from Howl’s blood, but at what cost?

Cate: What inspired you to write about the theme?
Brynna: CA was inspired by a drive along a country road on a crisp October night with a full reddish moon overhead. The series is set in a fictional town which mirrors my own.

Cate: Anything else you’d like to share?
Brynna:. I love chatting with readers. You can connect with me or read more about Claiming Ana and other books here.
Brynna’s Links
Website│Twitter│Facebook│Goodreads

Cate: Thanks for joining the party, Brynna! Happy Halloween!

That is a really creepy story, especially as he left no footprints. Did anyone believe you?

Thank you for hosting me!

Only my father, which was very strange indeed.