It's well known that a visit to Gettysburg might be your best chance of bumping into a spirit in Pennsylvania, but not all ghosts haunt the Civil War town. In central Pennsylvania, some are closer than you think! 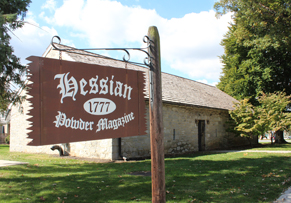 Several sites in Carlisle have fairly active ghosts. On the Army War College campus sits the Hessian Powder Magazine, the guard house built in 1777 by captured Hessian, who were then imprisoned inside it. 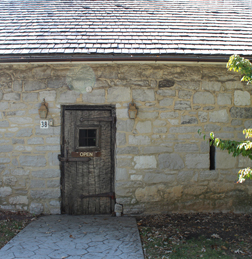 Since 9/11, you must go through inspection at the outside gate to gain access to the campus - sad, because I used to freely ride my bike through there.

But the guards were very nice, and gave me a map to find the building.

I didn't realize it was a museum that you could go inside. This door marked "Open" doesn't look creepy, does it? 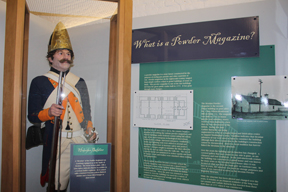 Once you're inside, there are displays such as this one.

I was the only person visiting the museum that day, so being inside alone made these statues a little creepy, too! 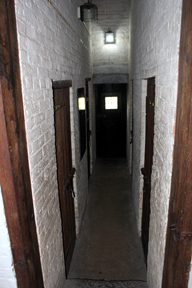 And that's when your neck hairs start to tingle. Because down that hallway are the prison cells where Hessians were locked up.

And that's where the sounds come from at night. Moaning, groaning and clanging echo across the War College grounds.

Some claim to have seen a soldier outside.

But one man got an unexpected shock when he went down that hallway to investigate, and looked through the window of the door. Looking back at him were the Hessian prisoners from 1777.

I have to admit, I'd read this story before, and jumped when I looked inside the last cell and saw this.

Don't laugh - you'd have been startled too! lol 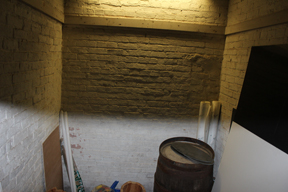 On the way out, there was a locked door with an opening high in the door, so I raised my camera and shot inside.

Nothing there but a few stored items, but it gives you an idea of how small those cells are.

I was hoping to capture an orb, too, but no luck. 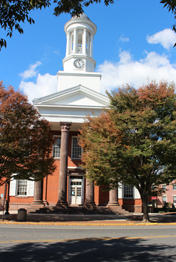 On the square in Carlisle, the old Cumberland County Courthouse is a pretty sight.

Those who work inside have some scary stories to tell.

One woman says she'll never work late by herself again after hearing slamming doors up and down the hallway.

You can hear other stories about this building on the Nov. 4 episode of SyFy's "Ghost Hunters." 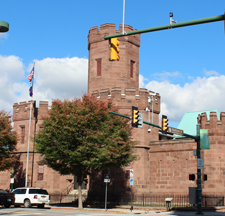 The grandboys like the place because it resembles a castle. But the prisoners who were locked up there didn't like it much, but apparently some still hang around.

One worker reports seeing a pair of boots walk down the hall, with no body attached.

There are many more such spine-tingling tales in the midstate, so if you're up for a ghost hunt, come and visit!

For now, that wraps up this year's Halloween party. Thanks to all the authors who've shared their spooky tales, tasty treat recipes and their own books! I hope you've enjoyed it as much as I have. 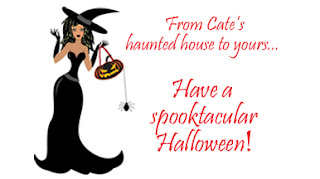 The Hessian Powder Magazine sounds like a neat place to take the grandsons. Wasn't aware of this one, Cate. Happy Halloween.

Thanks for checking out the post! I've been meaning to visit the Hessian Powder Magazine for quite awhile, but I'm glad I went in the daytime, lol. If you couldn't tell by my overuse of the word "creepy", it was exactly that!

This sounds like a spooky place and one that would be fascinating to visit. I loved seeing your photos and hearing about your visit. I have heard there are a lot of haunted places from the Civil War! Thanks for sharing. :)
~Jess