Lorelei Buckley takes us down a Midnight Road

Cate: Please welcome Lorelei Buckley to my special Halloween celebration. Lorelei, please tell us a little bit about yourself.


Lorelei: I’m happily married, and it so happens we’re celebrating our seventeenth wedding anniversary this weekend. I’m an animal welfare advocate, ghost enthusiast, and chocolate addict. I’m a Chicago woman at heart, but currently live in the great state of Texas.


Cate: Happy anniversary! What do you love most about Halloween?


Cate: My sentiment exactly. :) Do you have a favorite memory of a Halloween past?


Lorelei: Yes! As a kid, I’d found an after school job doing light housecleaning for one of our neighbors in Chicago. The woman employing me made costumes for a living. My mother was a single mom, and money was tight. So, when we were invited to a huge Halloween party, it caused a bit of anxiety. The costume lady saved the day and dressed me and my girlfriend in “I Dream of Jeanie” costumes, and put my brother in the coolest Wizard outfit. We rocked that party.


Cate: How cool! Have you ever had an unusual experience you couldn’t explain?


Cate: What frightens you the most?


Cate: Ever gone on a ghost tour? Or ghost hunting on your own?


Lorelei: Yes, for research and inspiration. I recently returned from a weekend in Jefferson, Texas, a haunted town near Shreveport, Louisiana. I try and blog about my ghostly excursions. Look for images of the broken wine glass from that trip. Very strange.


Lorelei: Not really. I don’t spend a lot of time in the kitchen anymore. I cook, but quick and uninteresting meals.


Cate: Tell us about your latest release, and where readers can find it online.


Lorelei: The title is Medium Crossing, and this is the short blurb:
Gritty medium Scarlett Prowse unintentionally alters her channeling technique to help streetwise hottie Holt Cavanaugh solve his brother’s murder. The event initiates a twisted ride, traversing the afterlife, the city’s underbelly, the deep, emotional fractures of an odd couple destined to be more than steamy lovers, and the mind of a killer who intends to make Scarlett his next victim. Medium Crossing is available on Amazon.


Lorelei: This is the Medium Crossing official burb:


Scarlett Prowse survived a hard-knock childhood, and today channels the dead to pay her rent. But nothing prepares her for Holt Cavanaugh, an intriguing new client riddled with familiar inner wounds and questions about his brother’s murder. To retrieve answers for him, Scarlett channels the darker side of the afterworld. There, sudden heightened abilities on her part thin the veil between life and death, enabling her to obtain vital information for her client.


Meanwhile, in the physical realm, a mystery person terrorizes Scarlett. Simultaneously, Holt’s shady street dealings slowly come apart. Her curiosity and his protective streak set them on an inseparable course where the afterworld and the underworld collide.


Scarlett and Holt’s nonstop journey through urban pockets, along with her jaunts to the hereafter cultivates a sensual romance, and exposes a tightly spun web of large-scale crime, mutually crossed paths, murders, and a relentless stalker with fatal intentions for Scarlett.


Cate: What inspired you to write about the theme?


Lorelei: I’d written novels and short stories about everyday people with, for various reasons, the sudden ability to see or hear ghosts. So then I wondered what life or a ghostly encounter would be like for someone whose daily normal included otherworldly phenomenon. That’s where it started. After I had my general idea, the characters introduced themselves. 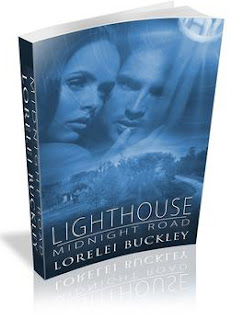 
Lorelei: Another newer release is Lighthouse: Midnight Road. It’s the first in the Midnight Road novella series, but it also stands alone. I wouldn’t leave anyone hanging. Lighthouse is described as a genre-bender, braiding paranormal, soft Sci-fi, and romance. It was really fun to write.


Cate: Readers, you’re in for a treat! Lorelei has a giveaway.


Lorelei: Free, signed, print copy of Lighthouse: Midnight Road for the first person who can tell me the name of the hero in the story.


Free, signed, print copy of Medium Crossing for the first person who can tell me the name of the haunted hotel I visited in Fort Worth, Texas.

Cate: Thanks for joining in the Halloween fun, Lorelei! Good luck to you readers!

Thank you for hosting me today, Cate. I'm honored to be part of the Halloween blog party.

Thanks for visiting, Lorelei!