Pennslvania Dutch hex signs are more than decorative - they're magic

Driving through the back roads of Pennsylvania, you'll see them on barns, mostly. The hex signs are colorful as a kaleidoscope, but the designs are anything but random. Many of the symbols represent magical talismans specific to whatever they're intended to protect. They originate from a type of magical practice known as pow wowing. 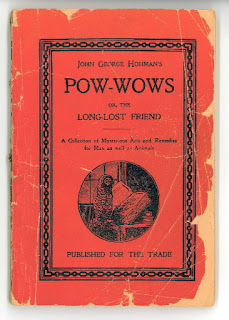 I only learned about pow wow magic this year after reading an article about one of the most haunted houses in Pennsylvania. Located in York, Pa., which is only about an hour from where I live, the house brought pow wowing to the national spotlight in 1928 when the owner, John Blymire, died from a pow wow hex. But not before Blymire murdered the man he believed had cursed him. Blymire set the man on fire, but his body didn't completely burn - superstition says because the Hounds of Hell came to reclaim the man. *shudder* Ever since, the road on which the house sits is called Hex Hollow.

Some still practice pow wowing, but for holistic medicine rather than hexing. Pow wowing uses herbal and spiritual techniques for healing - or not. There's conflicting information about whether Amish and Mennonite use pow wowing, but this article explains its origins.

This Wikipedia post is flagged for incomplete citations, but is still very interesting. It says that in addition to the book above, practitioners always have a Bible on hand, but also a copy of "the Romanus-Buchlein and Egyptian Secrets of Albertus Magnus. Important to some practitioners was the work The Sixth and Seventh Books of Moses, a magical text attributed to Moses and claimed as an esoteric sequel to the Biblical Five Books of Moses, or Pentateuch."

Years ago, I bought this small welcome sign for my kitchen. It has a Made In China sticker on the back, so I'm pretty sure it's free of any local magic or mysticism, lol.

So if you're driving through Pennsylvania Dutch country and overhear someone mention braucherei or Speilwerk or hexenmeister, stomp on the gas pedal and get out of there fast - or you might be hexed next!

Interesting collection of books they have on hand.
Heard you had a good time at the book expo with Susan and others!