Cate: Please welcome Pippa Jay to my special Halloween celebration. Pippa Jay, please tell us a little bit about yourself.
Pippa Jay: Hi. I write scifi and the supernatural, and sometimes there’s kissing involved. Scaper, Whovian, and Sith-in-training. I’ve spent most of my life living in the historical town of Colchester in the UK with my husband of 22 years and three little monsters, but continue to roam the rest of the Universe in my head.
I'm a dedicated member of the Science Fiction Romance Brigade, Broad Universe and EPIC, blogging at Spacefreighters Lounge, Adventures in Scifi, and Romancing the Genres. I'm also a double SFR Galaxy Award winner, been a finalist in the Heart of Denver RWA Aspen Gold Contest (3rd place), the GCC RWA Silken Sands Star Awards (2nd place), an 2015 EPIC eBook and LERA  2015 Rebecca finalist.
You can stalk me at my website, or at my blog, but without doubt my favorite place to hang around and chat is on Twitter as @pippajaygreen.

Cate: What do you love most about Halloween?
Pippa Jay: I love autumn in general - still warm and sunny but not the full on brightness and heat of summer. The smell of bonfires and household fires. The sparkle of dew or the white edging of frost in the mornings, and all the colours - red, gold and brown. But I was a practising witch as a teen, so All Hallows Eve still has a special significance to me along with Midsummer’s Eve. And every year my husband tries to do something a bit different from the usual scary faced pumpkins. Last year we had peppers with scary faces instead of a pumpkin, lol

Cate: How cool! And autumn's my favorite season too.Do you have a favorite memory of a Halloween past?
Pippa Jay: Last year was unusually warm, so we were wandering around in t-shirts - on Halloween! It was nice not to be shivering inside our costumes. Our local zoo runs an event called Shriek Week, when it stays open late around Halloween so you can walk around in the dark, take the train which is made into a ghost ride, go for a spooky walk and have witches and ghouls jump out at you, and generally have fun. My kids love it!

Cate: So much better than the year we had snow, lol. Shriek Week sounds like a blast! Have you ever had an unusual experience you couldn’t explain?
Pippa Jay: Yes. When hubs and I were first married, we rented a house set in what was the old Roman wall around our home town of Colchester. A couple of times our stereo system switched itself on - it had never done it before and never did it again after we moved, and we tried different plug sockets between the two occurrences. Hubs also saw a shadow that he thought was me waiting to jump out on him, but then I walked out of a completely separate room and the shadow was gone when he looked again.

Cate: What frightens you the most?
Pippa Jay: Anything bad happening to my kids. Closely followed by being covered in spiders (this is a regular nightmare of mine).

Cate: Some of ours are so big, they're practically domesticated, lol. Ever gone on a ghost tour? Or ghost hunting on your own?
Pippa Jay: Absolutely not!

Cate: lol Any favorite Halloween recipes you’d care to share?
Pippa Jay: Okay, this is a recipe based on a drink mentioned in my Halloween-themed story Hallow's Eve. 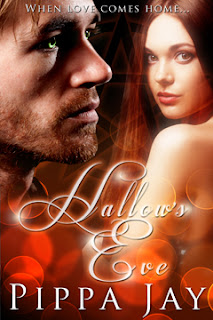 Hodge's Spiced Elderberry Cordial
1.5 lbs elderberries (or however many you have! You could also use any other kind of berries.)
Demarara sugar
Cinnamon Sticks
Cloves
Lemon

Method:
Remove the elderberries from the stalks using a fork. Place the elderberries in a saucepan with just enough water to cover them, then bring to a simmer and allow them to cook for 20 minutes.  The berries will soften and the liquid will be dark red.
Strain out the berries with a sieve or use muslin cloth (crush with a fork or squeeze the cloth to extract as much juice as possible), keeping the juice (be careful as this stains!)
Measure the amount of juice.
Pour the juice back into the empty saucepan. For every 2 cups of juice, add 2 cups of Demerara sugar, 2 cinnamon sticks, 2 cloves and the juice from ½ a lemon.
Bring the mixture to a boil and maintain for 15 minutes, stirring regularly to ensure all the sugar dissolves.  Remove the cinnamon sticks and cloves. Let the mixture cool while you prepare the bottles.
If you’re planning/able to store the cordial in the fridge, simply clean your storage bottles with hot, soapy water and then rinse in boiling water. Once the bottles are cool, fill with cordial, stopper and store.
Serve diluted with hot water as a warming winter drink and a boost during illness. In folklore elderberries were used as a protection against influenza, and research has now established that elderberry extract is a clinically proven treatment against flu. You could also add the same spices used in mulled wine for a more Christmassy variation. 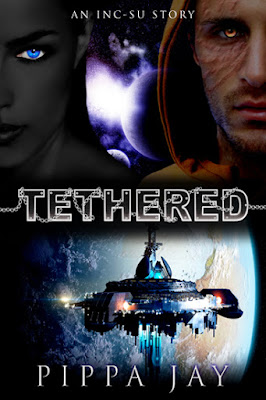 Cate: Mm, that sounds very tasty! Thanks for sharing. Now for the real goodies - tell us about your latest release, and where readers can find it online.
Pippa Jay: My most recent release is a re-release after my publisher closed this year: Tethered, a scifi romance/space opera featuring a succubus-like assassin called Tyree, who is assigned to protect a human diplomat already injured after several attempts on his life. It’s available at all online retailers.

Cate: Care to share a blurb or excerpt?
Pippa Jay: She can kill with a kiss. But can assassin Tyree also heal one man's grief, and bring peace to a galaxy threatened by war?
For Tyree of the Su, being an assassin isn’t simply something she was trained for. It's the sole reason for her existence. A genetically enhanced clone—one of many in Refuge—she's about to learn her secluded lifestyle, and that of all her kind, is under threat by a race capable of neutralizing their special talents to leave them defenseless.
For Zander D'joren, being a diplomat has not only cost him his appearance, but also the love of his life. Scarred, grieving, he must nonetheless continue in his role as co-delegate to the fearsome Tier-vane or risk a conflict that could only end one way.
Now both of them need to keep each other alive and maintain a perilous deception long enough to renegotiate the treaty with the Tier-vane, or throw their people into a war that could wipe out Terrans and Inc-Su alike. But there's more at stake than humanity, whether true or modified. Can the love growing between them save them both? Or merely hasten their destruction?
A science fiction romance novella, previously released by Breathless Press, 24th July 2014. 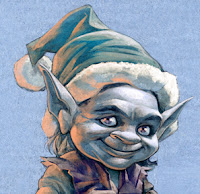 Cate: Love it. What inspired you to write about the theme?
Pippa Jay: I was having a discussion with some friends on Twitter about under-represented mythical races: how elves and dragons were getting all the limelight and that there must be loads of others we could write about for a change. The idea for a story about a succubus (NOT an under-represented race, I know) but in a futuristic setting popped into my head, and after that it wouldn’t leave me alone. I spent most of Christmas Day sneaking off to scribble notes.

Cate: Anything else you’d like to share?
Pippa Jay: This month I’m taking part in a huge cancer charity event called Scream! For the Cure, where bundles of books are auctioned off every week to support a great cause. Please stop by at http://screamforthecure.wordpress.com for more information and help my friend Cate Peace make some dreams come true.

Cate: Readers, Pippa has a treat for you!
Pippa Jay: I’m offering a digital format of my paranormal romance short to one person who comments on this post with their favourite paranormal entity.

Cate: Thanks for joining the party, Pippa! Happy Halloween to you and yours.

Thanks for having me!

Hi Georgia. Looks like you're the winner! Please email me at pippajaygreen at gmail dot com to let me know which ebook format you need. :)