Tales from around the globe with Christa Maurice

Cate: Please welcome Christa Maurice to my special Halloween celebration. Christa, please tell us a little bit about yourself.
Christa: I am currently rehabbing a house so I spend a lot of time on Homedepot.com looking at tile and lampshades.

Cate: Equal parts fun and frustration, I bet! What do you love most about Halloween?
Christa: Candy

Cate: lol YES.  Do you have a favorite memory of a Halloween past?
Christa: One year I was teaching kindergarten in South Korea and had to come up with a costume out of my own closet. I ended up making myself a crown out of felt and glitter glue so I could be a princess. I was working at the face painting and when my class came to have their faces painted they all started clapping and waving because they were so happy to see me. None of them wanted anyone else to paint their faces.

Cate: So cute! Have you ever had an unusual experience you couldn’t explain?
Christa: Many. When I turned 21, I was driving a mail truck. On my birthday I was listening to the Riverdogs album in the truck when I heard this horrific crash. I stopped the truck, turned off the music and looked in all directions. There wasn’t a single car on the road. Later that night, I was headed out to meet friends to break in my newly legal status. Driving along a road that was being prepped for paving I somehow lost control. The car spun 360 degrees and I landed in the ditch inches from a mailbox. I did not drink that night.

Cate: Yikes! Very scary. What frightens you the most?
Christa:  I used to say getting lost, but I’ve been horribly lost and found my way home (once in Italy.) I used to say losing everything too, but I’ve done that too. Now I guess my biggest fear would be being abandoned. That and camel spiders. Look them up! Camel spiders are terrifying!

Cate: I wouldn't mind getting lost in Italy! Ever gone on a ghost tour? Or ghost hunting on your own?
Christa: No. I tried to talk my friend into doing one in Prague, but I couldn’t convince her and I wasn’t brave enough to go by myself.

Cate: I bet there are tons of ghosts in Prague (and now I'm jealous!) lol Any favorite Halloween recipes you’d care to share?
Christa: You take a one-pound bag of M&Ms. Pour them into a nice crystal bowl. Pour a big glass of milk and turn on a scary movie.

Cate: Perfect! Tell us about your latest release, and where readers can find it online.
Christa: My most recent release is A Gift To Be Simple, book 3 in the Rock And Roll State Of Mind series. Gian, who has caused a lot of trouble in the first two books, meets a woman who really lights his fire, mostly because she is totally disinterested in him. Rachel grew up Amish, but left it behind because it was too restrictive and she wanted more out of life. Gian gives it to her and it might be too much for her. It’s available on Amazon, Barnes & Nobel and iTunes. 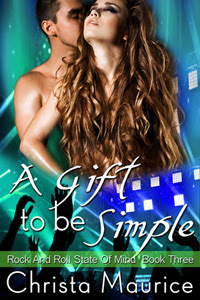 Gian caught up with Harvick at the elevator. "Coming for Rachel's brother?"


"Yeah. This schmuck better be good." Harvick crammed his hands in his pockets.


"If he's anything like Rachel he'll be great. I promise." Hopefully, the kid was just like Rachel on the work ethic department or he was going to be looking at five months of shit from Harvick. "Rachel said he once built flapping angel wings for some kind of church thing."


"As long as he can keep his wiring straight and do what he's told, fine." The elevator opened and they stepped in. "This kid is the wardrobe woman's brother?"


"Rachel said he just turned eighteen." Which was why he was on his rum springer, whatever that was. What kind of a weird, backwater upbringing did Rachel have with ten siblings in a family out in the sticks?


"And he's a trained electrician at that age?"


"He said something about wiring mobile homes for a living if he had stayed home."


The elevator doors opened on Rachel's floor so Gian lead the way to her room. He shouldn’t have gotten involved. He should have just stepped back and let what was going to happen, happen. Then he wouldn't have Harvick's fury hanging over his head. But if the kid worked out, Rachel might be very grateful. He knocked at her door.


She was scowling when she answered. "You are here."


"Both of us. Rachel, this is Harvick. He's going to be your brother's boss."


The boy crowded around Rachel in the narrow hall into the room to shake Harvick's hand. "It's very nice to meet you, sir. My name is Aaron."


Harvick shook his hand and grunted again. He glanced at Gian and straightened up. "Harvick. You know how to do electrical work? We put everything together and tear it all apart again every day on tour."


"I can do that." He stood stiff and straight as an oak. Must run in the family.


"You're going to be working eighteen hours a day sometimes."


"I don't mind. At harvest we used to work sun up to sundown all the time."


"And you're gonna wake up in a different city almost every morning where you don't know anybody but the guys on the traveling crew."


Harvick pursed his lips. "All right. Let's go grab a bite and see if we can stand each other."


Gian caught Aaron's bright grin as he walked out of the room. The kid was wearing brand new blue jeans, a plain black t-shirt and blindingly white sneakers. Rachel watched her brother walk down the hall, still frowning. Then she walked back inside the room. Gian followed, closing the door behind him.


"Because I wanted him to have to go home." She turned around, tears welling in her eyes. "If he hadn't been able to find a job, he would have had to go back home."


"I was just trying to help." What was she so afraid of? There were guys who made their whole living going from tour to tour. If Aaron was eighteen, this was the perfect time for him to try it out, especially if he had a made-to-order expertise like electrical. Good looking kid like that would be neck deep in all the girls he could service with money and enough freedom to really enjoy himself. Rachel was probably jealous that she couldn't do something like her brother was.


"Well, don't. Aaron is..." She paused rubbing her forehead with her fingertips. "Aaron is gullible. He is very clever, but he isn't very bright. He doesn't belong out here."


Gian crossed the room, tempted to reach out to her, but she was holding her elbows out like spikes. "What do you mean 'out here'?"


"I mean out here. Away from home." She squeezed her eyes closed. Her tears had never fallen. "Never mind. He will be fine. You have a clean tour."


Gian pinched his lips together. The band was drug free. The crew, not so much. Aaron didn't have to get involved with that stuff if he didn't want to. He was a big boy. He could make his own decisions. Harvick kept a pretty tight ship too. Nothing got so out of control that it interfered with the tour. "He'll be fine. And you'll be around to look out for him. It could be worse. What if he'd found a job here? You're going to be gone most of the time."


Gian leaned down. Did she look pale or was it the light? And she kept rubbing her forehead and frowning. "Are you alright?"


He put his arm around her shoulders. "If you're that worried about it I can tell Harvick to not hire him."


"Let's go get lunch then." He guided her toward the door. "Why didn't you eat breakfast?"


"Aaron felt his clothes were not sufficient and I had to buy him new ones. We had little time so we didn’t stop at the hotel breakfast. When we got back, he ate all the food I had in the room."


"Honey, if you are broke I can give you some money."


She pulled away at the door and for a second he thought she was going to slam it in his face. "I don't want your money."


Gian took her hand, tugging her through the door with him. If she was that hungry, they should just hit the hotel restaurant. "You can't starve until you get paid. Call it a loan if you want."


She sighed and let him lead her down the hall. In the elevator, she let him put his arm around her shoulders and leaned her head on his chest. Much better. He'd been hoping for slightly more enthusiastic gratitude, but this would do for now.

Cate: What inspired you to write about the theme?
Christa: Aside from being obsessed with rock stars, I’m also interested in addiction. I live less than two blocks from the home of one of the founders of AA. Several years ago I watched a documentary about addiction in the Amish community and it really depressed me. I grew up around a lot of Amish people and never saw that side of them.

Cate: Anything else you’d like to share?
Christa: Nope, I’m pretty sure there’s something here that needs to be painted or cleaned or scraped so I better get back to work.

Cate: Thanks for being part of the Halloween fun, Christa!

Email ThisBlogThis!Share to TwitterShare to FacebookShare to Pinterest
Labels: A Gift to be Simple, Christa Maurice

A fellow traveler! I haven't yet made it to Italy, but I've wanted to go for years. It's on my list of must see places. Especially the Amalfi Coast. We're headed for Australia in 2016 though. And I'm totally addicted to HGTV shows like Rehab Addict, Love it or List it, and my fav, Property Brothers. Having a rehab project and lurking at Home Depot stores sounds like a pretty fun way to spend some time to me. That and reading. I'll have to check out your Rock and Roll State of Mind series!