It’s not one of the things I’d love Pennsylvania to be recognized for! But it made the list of top 13 places around the world that contain portals to Hell.


If you do a little digging, you’ll find conflicting stories. HauntedUSA says:  “It is a story of death. It is story of despair. It is a story about attempting to breach the very boundries of hell itself. It is the story of Toad Road.”


Many would argue that it’s just a story. Period. But who knows? I’m certainly not going to find out. York is about an hour from my home. That’s not nearly far enough from a portal to Hell!


Wikipedia allows for two separate tales about the Seven Gates, the second sounding more likely but every bit as tragic – a man murdering his family in the 1950s. And no, it’s not called Hellam Township because it’s a portal to Hell – that’s an urban legend.

But it doesn’t stop Hellam Township from including the story on their web site. Not to drum up tourism, though – the land is privately owned, and trespassers aren’t welcome. Especially satanic cults, though they’ve reportedly used the site for rituals *shudders*

I know I won’t be going anywhere near there on October 31st. And I hope they keep those gates locked tight!

Or is the real gate to Hell in Turkey? 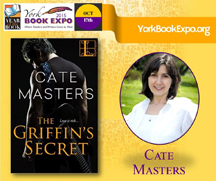 I'm hoping for the latter, as today, as it happens, I'm headed to York.

I'm one of many authors, bookstores and other vendors who'll be at the York Book Expo - waiting for you!

Don't be afraid, you'll be perfectly safe. No one's ever disappeared from the York Fairgrounds. :)

If you're in the area, I hope you'll stop by.

I wouldn't want the gate to hell in my back yard either. Murder stories are fascinating though. Are you gonna use that in one of your books? Great interview. She sure liked to giggle :)

It is a strange story! Thanks for checking out the interview :)