In the Author Spotlight: K.A. Laity

Cate: Please welcome K. A. Laity. Kate, will you please share a short bio with us?
Kate: I'm a medievalist, novelist, journalist, dramatist and English Professor. Much of my work is inspired by myth, folklore and fairy tales, like my short story collection Unikirja which grew from my love of Finnish myths and legends. I use a lot of my studies in my work, because I love sharing the magical discoveries I have made in old manuscripts and obscure languages.

Cate: Tell us about your latest release and where it's available.
Kate: My latest book is Pelzmantel which is available from Immanion Press. You can also see the book trailer.

Cate: Please tantalize us with a story blurb or excerpt.
Kate: Let's see: there's a fox who's really a centuries old Irish witch, there's a kitchen maid who's really a princess in disguise – and then there's this walnut that holds an entire wardrobe! Pelzmantel spins a tale of medieval magic where people and things are seldom what they seem to be on the surface. Infused with genuine magical lore and history, this inspired retelling of the Grimm Brothers' "Allerleirau" uncovers the seldom-glimpsed world behind the glitz: the hard work that keeps a castle running and the secrets lives of women in the Middle Ages and the bonds of friendship they forge.

Cate: What inspired you to write about the theme? 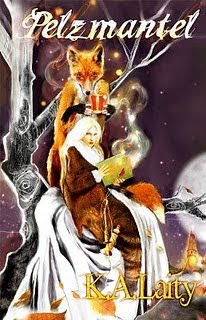 Kate: I have always been fascinated with fairy tales and I loved being able to incorporate what I knew about medieval magic. From the start, I knew the story would be told from Nanna's point of view—she's the centuries old witch from Ireland—but it would be set in Denmark. It was not uncommon for the Vikings to capture Irish people and sell them as slaves.

Cate: How do you develop your plots and characters?
Kate: I fleshed out the original brief tale by figuring out the motivations behind the events: a mother dying, a father turning against his own daughter, her escape. Who were the people that would help her, and what were their stories? Few of the characters are developed, let alone sympathetic. I wanted to show how these events might plausibly develop.

Cate: Do you feel as if the characters live with you as you write? Do they haunt your dreams?
Kate: I hear their voices, sometimes at night, often just as I'm waking. I have a long-developed habit of keeping a notebook by my bed so when these visions come I can write them down before they slip away. Morning is usually when nagging problems get solved, if I can capture the answer from that liminal state. My subconscious works while the rest of me sleeps.

Cate: What's next for you?
Kate: I'm working on final revisions for an urban fantasy novel that's set in the present but in a slightly different United States, one that lost the Revolutionary War and has recently come under the occupation of some rather enigmatic aliens. My heroine is a kind of accidental shaman, who's reluctant to figure out what that means and mostly seems to disappoint the people around her—like putting her best friend into a coma for ten years. He's just woken up and it sets in motion a lot of strange events.

Cate: What’s the most interesting comment you have received about your books?
Kate: Oooh, hard to say; maybe when Liz Hand called me "a very remarkable sorceress indeed".

Cate: Who are some of your favorite authors and books? What are you reading now?
Kate: I read a lot of non-fiction, especially when I'm writing fiction, either biographies or information about a time period or subject that will become part of a new novel. The books that made me a medievalist are very important, Beowulf and Njal's Saga. Both get little nods in Pelzmantel. In the fantasy realm, I love Liz Hand, Storm Constantine, Charles de Lint, Graham Joyce and Clive Barker but I also am very fond of nineteenth century novelists like Jane Austen, Elizabeth Gaskell and Wilkie Collins. I'm starting a new novel that was inspired by Angela Carter and Kinsgley Amis -- don't ask me to explain how I get those two together! –- but they're also important writers for me. I read a wide variety of books, comics and blogs.

Cate: Where can you be found on the web?
Kate: My website is www.kalaity.com and my news blog is katewombat.blogspot.com; I also have a comic gothic serial at kalaity.blogspot.com and I'm on Twitter and Facebook (and so is C. Margery Kempe).

Cate: Is there anything you’d like to ask our readers?
Kate: What's your favourite fairytale and why?

Cate: Thanks for being my guest today, Kate! Best of luck to you.

Thanks for hosting me today, Cate! It's a delight to be here.

Are you sure you're not a shaman yourself? You weave real magic out of words.I'm deeply impressed and very proud to know you.

@Cate -- Thanks! I am so delighted with Ruby's art. It's simply magical.

@Jack -- Thanks for stopping by! Well, yes indeed, I am a shaman (or technically, shamanka). I didn't realise I kind of became one accidentally (long story) and when I decided to be trained as one, I was somewhat shocked to find I already knew many of the skills. For me, writing is definitely a shamanic practice.

My favorite fairy tale...wow, to select one. Or three words to describe one's work (in my case, "a decent try"). I need the new version of PELZ and CHAS. FLAME...(wv: hotti)