Bruno diCesare lives in the shadows. Alone and hidden from the world, his only joy comes but once a year---at Carnevale. For ten days, he can blend in with the colorful, masked masses without revealing his true nature. But this time, he is faced with fiery temptation.

Carnevale allows Melina Weaver to be someone else--someone sexy, daring, enticing, someone who lives on the edge. It's a far cry from her real life, with long and boring hours spent in a sterile lab. When her fire dancing arouses the curiosity of a dark and compelling stranger, she might have more excitement--and danger--than she ever imagined.

Can Bruno escape his cursed existence? Can he protect her, and can she trust him to save them both? 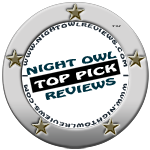 Cursed is the first book in the Vitruvian Man series and it’s a doozy. I absolutely loved the story line. This is the first book and I can't wait for the second. The author, Cate Masters, gave me a new twist on DaVinci's Vitruvian Man.
Night Owl Reviews - 5 stars, Top Pick
http://www.nightowlreviews.com/v5/Reviews/Angibabi4-reviews-Cursed-by-Cate-Masters

This was an exciting look into a new series, a new world really. This could end up being an amazing and very intriguing series. One that I recommend for everyone to get and watch for.
Reviewing Vixens: 4- Excellent read - highly recommended
http://reviewingvixens.webs.com/apps/blog/show/26320005-cursed-by-cate-masters

I really enjoyed this book. A lot like Phantom of the Opera, yet not. I had to read this in one setting! Such great characters and what a plot! I highly recommended this book.
Staci AKA Patches - 5 STARS
http://www.goodreads.com/review/show/621229197

This book was awesome. It was short but packed a lot in the story. I liked how the author tied the science and technology in to this story instead of just magic or the dark arts. I look forward to the next book.


Bruno was cursed by none other than Leonardo Di Vinci, he liked to play with black magic and Bruno is the result of that! Chimera shares Bruno's body! Once a year he can be with the rest of the world. This year he meets Melani a brilliant scientist who has gone to The carnival to take a break from her research. When they meet its love at first touch! Will Melani love hi as ,much as he loves her?
It was a fabulously written story! I'm looking forward to the next book.
Indy Book Fairy -  FOUR CHIMERA FAIRIES
http://paranormalbookfairy.blogspot.com/2013/09/cursed-spotlightreview.html

Cate Masters does an extraordinary job of creating the scenery of Carnevale and the sumptousness of the life that Bruno lives in his lair.
4 stars - Snarky Mom - http://www.snarkymomreads.com/?p=730


Cate Masters series starter Cursed is a unique blend of historical facts and paranormal elements that nicely combine in an action-packed romantic story that lays the groundwork for what promises to be a memorable series.  Though this story wraps up nicely it still leaves plenty of questions unanswered that will have readers clamoring for more.
Words of Wisdom from the Scarf Princess - 4 stars
http://wowfromthescarfprincess.blogspot.com/2013/09/book-tour-for-cursed-by-cate-masters.html


The chemistry between the main characters is steamy, and Bruno lets out just enough of his animal side to make their lovemaking dangerously hot.
Bitten by Books - 3.5 tombstones
http://bittenbybooks.com/63752/cursed-by-cate-masters/

It is the first book from this author that I’ve read and I like her style.
Confessions of a Romaholic - 3
http://confessionsfromromaholics.com/cursed-the-vitruvian-man-1-by-cate-masters/

Casting Call
Who did Cate imagine as these characters? Find out here.

Light danced in his dark eyes. “I must admit, your fire dancing fascinated me. What made you choose such a dangerous skill to master?”


“The thrill of the challenge, I suppose.” It balanced the rest of her mundane life, to a degree. Mastering each new level gave her a sense of achievement, where work couldn’t.


Something flashed through his dark eyes. “Mistakes must be very painful.”


“I practiced a long time before I worked up the nerve to actually light the wands. I found the fire great incentive to focus, however.” God, her grin must be goofy, the way he stared. Such gorgeous eyes, such a deep brown they almost appeared black. He probably had rugged features, if his large hands provided any indication. Too bad he wore gloves, another barrier between them.


“What about you? What other magic do you know?” Oh please, can you get any more ridiculous? It sounded like a line from a bad chick flick.


The crinkle around his eyes was the only evidence of his smile, but enough to charm her.


“Lifetimes of studying the dark arts have provided me with many tricks.”


He stiffened in her arms. “Pardon?”


She watched him carefully. “You said ‘lifetimes’. Plural.” And what the hell did he mean by ‘dark arts’?


Rigidity masked the grace of his movements. “I’m sure you’re mistaken.” He stared over her head as they whirled to the song’s rhythm.


Mistaken my ass. How very strange. More strange that the question upset him. He’d clammed up, and his muscles were so tense, she expected him to bolt. Better to drop it. For now. “Must have been a slip of the tongue.”


“Yes.” Relief sounded in his tone, though guarded.


This man had something to hide. How intriguing.

Melina should have stayed in her room. Finding him had seemed like such incredible luck. Now she wondered whether luck had turned against her.
That sound—almost an animal sound—had that come from him? Had she imagined it? Strange things went on during Carnevale, her online friends had said, some so inexplicable no science could explain them. She’d laughed when they warned her she might get in over her head.
The sheer strength of his muscles, the raw power beneath his clothes, thrilled her. His pace conveyed the same urgency.
Pressed to his side, nerves jangling, her foot slipped on the stone step.
In one fluid motion, he scooped her into his arms and continued hurrying along. “Are you all right?”
“Unless embarrassment leaves a mortal wound. I’m normally not so clumsy.” She settled against his broad chest. Such incredible stamina. An image pierced her mind: his muscular, naked torso above her, his hips rocking against hers. His presence overwhelmed her, and she was acutely aware of every motion, every breath.
At the bottom of the stone stairs, he set her on her feet but maintained his firm hold. “Dampness has a habit of lingering here. You’d best allow me to assist you.”
“Please.” She fitted herself against him, acutely aware of the way his body moved against hers.
“In these calle of San Samuele,” he said, “Giacomo Casanova spent his youth.”
“Calle?” She should have brushed up on her Italian.
He dipped his head closer. “Narrow alleyways.”
“Narrow and dark. I wonder how many trysts Casanova had in these alleys?” And Casanova had nothing on Bruno. Women probably flocked around him constantly. Acid flashed through her at the thought.
“Too many to recount.” He paused, then added, “If one believes the writings in his diary. His mentor, the poet Giorgio Baffe, lived just down there.”
“Mentor?” She didn’t recall Casanova writing poetry. Did Bruno as well? Or was he not romantic that way?
“Of a sort. The man who introduced Casanova to worldly pleasures.”
The way the last two words rolled off his tongue, so enticing. She glanced at the dark steps that led to deeper shadows beside the canal.
She surprised herself by steering him down there, tugging him to an abrupt halt. “Do such mentors still exist?”
He whirled her against a wall. “Why? Would you be interested?”
She let her hands wander across the contours of his chest. “You did offer to introduce me to the delights of Venice.”
The same growl as earlier rumbled in his throat, unmistakable this time. “You do like to play with fire, don’t you?”
And he knew how to ignite one.