Brynna Curry spills the beans - and has a giveaway too! 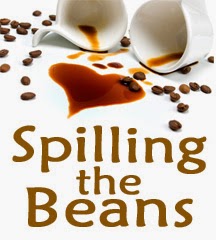 Hi Brynna! So glad to have you at Spilling the Beans, where we can learn a little bit about you, and your book. Grab a cappuccino and let’s chat. Unless you have another favorite drink (alcoholic or otherwise)?
Iced caramel coffee please.

Fur or feathers, pet-wise?
Fur. I have a cat, Asheron (Named for SK’s Dark-Hunter leader.) We call him Ash. He’s very spoiled and likes to curl up beside me while I’m working.

Tell us something about yourself that’s not in your bio.
I’m a DIY’er. I will tackle almost any project if I think I can figure it out or find a how to video online. I did most of the renovating to our home over the last couple of years, including replacing floors, ceilings and plumbing. I *heart* HGTV. lol

What do you like to do when you’re not writing?
I love to read. I rarely have time anymore, but when I do, I like to curl up in the corner chair with Ash and just read something on my Kindle.

If you had to choose another profession besides writer, what would it be and why?
Well, I do have a day job as a secretary, but it isn’t a chosen profession. I can’t imagine any career  I could love more than being a writer. Eventually, I plan to make a break from the 8-5 world to write full time.

Are you a night owl or early bird?
Night owl. I get up very early and stay up late. I write around my day job and family life so that means most every night is late.

If you could have one superpower, what would it be?
To control all the elements, particularly fire because I’m most afraid of it. In other words, I’d want to be a phoenix, like my character from Fire’s Ice, Devin.

How would your muse describe you?
Scatterbrained, bouncing from one idea to another. Eventually, her seemingly and maddening rambling side trips end up somewhere great. That’s just how her brain works.

If you could have dinner with anyone, past or present, fictional or real, who would it be and why?
My great, great grandmother Amanda Faye Curry, so I could reclaim just a little of our lost family history.

Beethoven, Beatles, Foo Fighters or Keith Urban (what type(s) of music makes you rock out)?
Anything from AC/DC to Mozart so long as it’s good. I am not a fan of most rap or screaming music.

Does music influence your writing? Do you have a music playlist for your book?
Oh, yes. Music is very influential on my writing. I grew up with a father who taught band. He had me interested in music from a very young age and it’s to his credit that I like a variety of music and can play several different instruments. And so, I always have music playing through my earphones while writing. What I listen to depends on my mood.  I don’t have a playlist for each book, but my couples do have songs. One that particularly resonates with me for them.

While creating your books, what was one of the most surprising things you learned?
How easy it was to become immersed in a world entirely of my own making. My characters are very real to me and I always drag out writing the last few chapters. It’s hard to say goodbye.

Where can readers find out more about you?
Please visit me at brynnacurry.com

Please tell us a bit about your latest book.
My latest book is Claiming Ana, part of a new series Triple Star Ranch.

Blurb: Where there’s smoke, there’s fire…and passion that won’t be denied.
The child of a gypsy and fey, small-town veterinarian Dr. Anastasia Brannon has always hidden her magic for fear of ridicule. A red-hot encounter with the new PI in town makes their attraction impossible to deny. Throwing caution to the wind, she indulges her desires but keeps her secrets close.
A man with a shady past and secrets of his own, Howl Raven uses his feral talents and tracking skills to make a living, doing his best to lay low and hide the curse that haunts him every month. So far, so good…until an uncontrollable shift outside the full moon leaves him the victim of a werewolf hunter.
When she finds the enigmatic investigator wounded in the woods near her cabin during a storm, Ana provides medical care on instinct. She may be the only one who can banish the wolf from Howl’s blood, but at what cost?

What inspired you to write it?
There just aren’t enough stories with southern characters in rural settings. I love my hometown and the people in it. I wanted to share the experience with others.

Thanks for spilling the beans today, Brynna! Best of luck with Claiming Ana.

Blurb: Writer Liv Corrigan has the worst luck with men -- her telepathy tends to make them run for the hills. When she meets widower and ex-cop Jack Roarke, she decides to keep her talent hidden. Things are looking up until their third date crashes and burns as the man who murdered Jack’s wife turns out to be after him too.
Injured, Jack retreats with Liv to his house under armed guard. But with Liv’s mysteries rapidly coming unraveled, a diamond-thief killer to stop and passion in the air, the safe house is anything but safe for their hearts!

Excerpt #2 – First meet between Hero and Heroine
Jack scanned the bookstore as he sat in the hard metal folding chair, at the small table, and wrote. He thought his hand would fall off. Whoever said writing wasn’t real work had to have been crazy. He knew things about two hours’ worth of people their mothers probably didn’t know. Mandy Lou something or other had a granny who thought he was grade A and she was his number one fan. She didn’t look old enough to be allowed to read his brand of horror, but she had two copies of each of his books.

Jack had politely—he hoped—shrugged off the forty invitations to dinner, fourteen offers for coffee, and two very indecent proposals for ‘wild, hanging from the chandelier sex’ to quote one lovely fan. All in all, a long day barely described it, but he’d seen people and observed, that was for sure. If it helped with the new book, it might have been worth it, and then again maybe not.

Ellie dropped by to see how things were going, and then promptly ran away when he tried to beg out. He didn’t like being maneuvered, and Ellie was a champion at it. Entertaining the notion of strangling her got him through the second hour, but considering he needed a good editor, he changed his mind.

The line grew shorter. While he juggled the newest Hastings baby on his knee, which the boy’s proud papa had insisted on, Jack inscribed a message in the front cover to Mrs. Hastings, another number one fan and the mother of six children all under ten. How does she have the time to read at all? His message to her read, “Mrs. Hastings, I’m your number one fan. You rule. Jack.” Mentally saluting her efforts, he passed back junior, and sent them on their way. He automatically reached for the book a slim hand offered. Eyes down on the cover of what he’d created, he said the same thing he’d told countless others. “Hi, who should I make this out to?”

Her voice alone lifted his eyes to meet hers, a musical lilt that teased of mist and bogs, faeries and leprechauns. She was dressed professionally, but he could easily imagine her calling up a wild wind or casting spells. She was only about 5’4” and slim, claimed black Irish coloring. He saw a flash of what might have been a premonition, but after blocking the gift so long he couldn’t hold on to it. Did he smell rain? Candles or lightning? But the sun was shining. For a moment he just stared, couldn’t speak , and was certain he knew her but couldn’t remember where from.

“Is something the matter?”

He quickly signed her book, before he forgot that was the reason for their meeting in the first place. She was the last in line, and he was free. Thank God! Sorry, muse, position filled.

About the Author
Brynna Curry was born south of the Mason-Dixon Line. After living all over the southern states, she finally landed in North Alabama where she lives with her husband and their three children. Growing up, books fueled her dreams and imagination, ultimately becoming her salvation during the hardest times in her life.Writing is her passion, but she enjoys the fun of sharing those stories with others by reviewing books and working in publicity.
When she isn’t writing or promoting, she’s often found haunting the library for new books to read or just spending an quiet evening at home with Jackie watching old westerns on TV. Although her wizards, shifters and vampires are as real to her as anyone, she insists love is the truest magic and with it every day is another wonderful adventure.

What a great interview with Brynna! Her series sounds interesting. I always enjoy learning more about authors and the story behind their writing. Wishing her the best of luck! :)
~Jess

I enjoyed the interview and look forward to reading the book.
Digicats {at} Sbcglobal {dot} Net