In the Author Spotlight: Jessica McHugh

Cate: Please welcome Jessica McHugh to the Author Spotlight. Jessica, will you please share a short bio with us?
Jessica: I'm a 27 year old writer who pretends to be a production associate at a molecular diagnostics company in Frederick, MD. I have an amazing husband, a roly-poly cat, and a fantastic life. I'm mainly an author of speculative fiction, but I just finished my first suspense novel and have started writing a historical fiction novel. I'm branching out! I've had 3 books published since 2008 and starting in March 2010, I have 6 more being released, including an epic fantasy series.

Cate: Tell us about your latest release and where it's available. 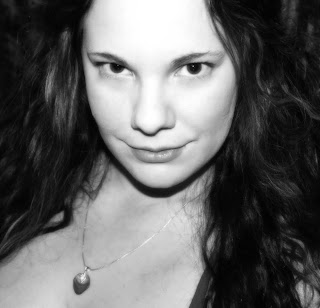 Jessica: My latest release was Song of Eidolons; it was my first journey into writing something that wasn't on the extreme ends of speculative fiction. It's also my favorite book I've written so far. Basically, it's the story of a 22 year old girl who has been lived within the walls of her grandfather's house for her entire life and what happens when she learns that it's not the norm.
Song of Eidolons on Amazon.com

Cate: Please tantalize us with a story blurb or excerpt.
Jessica:
Her smile started on the inside and flowered out so brilliantly that the sun seemed to climb into the sky again. She looked at the trellis leading to her window as if giving William a shy order, and he obediently and eagerly leapt onto the ivy-entangled lattice and began climbing. He scaled the wall with such nimble grace as if he’d been training his entire life to make that climb, and when he reached her ledge, she pulled him inside and they tumbled together onto the floor. He courteously began to withdraw, but she pulled him back to her and breathed him in. He still smelled of the afternoon’s honey, but when she eased him closer and his lips brushed against hers, she realized that the sweetness of his mouth belonged to him.
“My girl,” he whispered. “I was made to protect your shine as if it was my own.”
She curled against him and rested her lips against his cheek and whispered into his ear so sweetly that it made his body harden deliciously against hers.
“It is yours,” she replied.
He gently brushed the golden hair out of her face and inched closer to her lips. This was the moment, she thought: the first real kiss, the first taste of love, the first sunset that seemed like dawn. His lips pressed against hers softly but with obvious hunger, and from the first instant of contact, he felt his love for her surge brilliantly from top to toe.
Oddly, Delaney felt nothing. Nothing was stirred to rival or even match the poetry ingrained in her mind by the great romantics. She felt somehow more hollow than before, as if the kiss had extinguished rather than igniting some flame within her. Still, she smiled and allowed him to embrace her, believing that even if it hadn’t happened instantly, William could teach her to love. She simply hadn’t had the experience, but as an academic, she was sure he could easily educate her.
As the kiss continued, she couldn’t deny the dread building within her. How strange it was: that unnamable fear, and how she suddenly longed to be Rapunzel again, to force the Prince back down the tower wall, to curl up behind the walls and look upon the world again without fear. She thought perhaps she’d put too much expectation into the kiss; after all, only in fairy tales did true love accompany the first kiss. In realistic stories, it was merely the first step. She preferred the thought of the latter; love at first kiss was a divine notion, but it wasn’t true. She was sure that love could quickly happen though; it just took a little more time than the ten-minute lip lock allowed. When he descended her trellis, she was sadly eager for his disappearance into the dark of night, but William kept his eyes upon her and even departed backwards as to not break the contact between them. Though she thought him gone and pulled the curtains closed, she had a sneaking suspicion that there, in the shadows, he remained paralyzed by the sweet spell she’d inadvertently cast over him. As Delaney lay in bed and pulled the covers to her chin, she wished upon nothing, for she could see no stars. She wished anyway that soon, his spell would be cast upon her.

Cate: What inspired you to write about the theme?
Jessica: I had just finished Camelot Lost, an Arthurian Legend book, and I was toying with the idea of writing about another legend: Fionn MacCool. I outlined 75% of the story and began to write, but just a few paragraphs in, I decided that I really didn't want to do another story about an epic legend. I really didn't want to get pigeonholed into that genre. So I started fresh, but I used elements of what I'd outlined in the Fionn MacCool story, and I couldn't be happier with what came of it.

Cate: Any specific inspiration for your characters (an actor/actress or personal hero)?
Jessica: Not at all. Delaney Lortal is like no one I know or have ever seen. She has very minimal elements of me, but she's an original.

Cate: How do you pick the character’s names? Jessica: When it comes to last names, I tend to borrow from my friends. First names are a different story. Sometimes they just pop into my head, and sometimes I'll end up heading over to a baby name website.

Cate: Do you feel as if the characters live with you as you write? Do they haunt your dreams?
Jessica: I tend to work on several stories at once. While I'm writing one, I'm editing one or maybe two other books so the characters don't really inhabit my head unless I specifically think of one. I've definitely tried to dream about my stories and characters in the hopes that I'd get a really cool idea, but it never works. However, a lot of stories I've written have been BASED on dreams I've had. The novel I just finished, Rabbits in the Garden, was heavily based on a dream.

Cate: What's next for you? 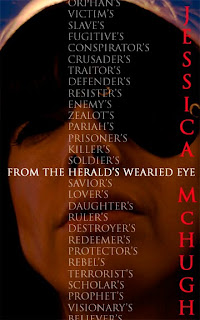 Jessica: “From the Herald's Wearied Eye” is coming out in March 2010 and “The Sky:The World” is being released later this year. I also have a 4 book fantasy series called “The Tales of Dominhydor” coming out starting in October 2010. I just finished “Rabbits in the Garden” and have begun writing a novel about Elizabethan playwright Christopher Marlowe called “Verses of Villainy.”

Cate: What’s the most challenging aspect of writing? Most rewarding?
Jessica: The challenge IS the reward. ;) Seriously, the most challenging part for me is trying to get everything I need to get done...done! Working full time during the day, it's hard to squeeze in all of the writing and editing I feel like I should get done in a day.
The greatest reward for me is the writing itself. I find it extremely therapeutic and not to mention FUN! I really enjoy developing characters and finding out what becomes of them through the story.

Cate: What’s the most interesting comment you have received about your books?
Jessica: A publisher referred to my YA horror novella “Danny Marble & the Application for Non-Scary Things” as “a Lemony Snicket book meets Nightmare Before Christmas.” That was a huge compliment to me.

Cate: Who are some of your favorite authors and books? What are you reading now?
Jessica: My favorite author is Roald Dahl hands down. Whether its a children's book or “My Uncle Oswald” which is extremely adult, his writing captivates me. I love “The BFG” and “Matilda” but I think my favorite book to reread over and over is “The Phantom Tollbooth” by Norman Juster. Not only is the writing clever, the imagery is fantastic.
Right now, I'm reading my own books because I'm editing three at a time. I hope to be able to take a small break soon and read something new.

Cate: Where can you be found on the web?
Jessica: http://www.jessicamchughbooks.com and all of my books are available on Amazon.com

Thanks for being my guest today, Jessica! Best of luck with all your endeavors.

What inspired your title? What are Eidolons?

I was inspired by the poem "Eidolons" by Walt Whitman. The following verse is actually at the beginning of "Song of Eidolons".

"Put in thy chants said he,
No more the puzzling hour nor day, nor segments, parts, put in,
Put first before the rest as light for all and entrance-song of all,
That of eidolons."

And "eidolon" has a few definitions, but my "eidolon" means an ideal or idealized figure. :)