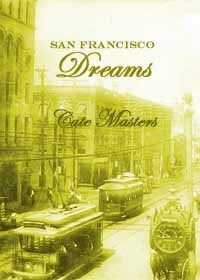 San Francisco Dreams
Historical romance novella
Available for Kindle
Available at Smashwords
Can the daughter of a well-known prostitute start a new life where no one knows her family history? Norah Hawkins is sure going to try. When a letter arrives deeding her property in San Francisco, she packs her bags.
Irishman Gerard MacKenzie likes his life free and easy, but is tired of the snobbish East Coast folk. San Francisco has enough vice and folly to suit his needs. Meeting Norah gives him the opportunity to bartend in her saloon. Maybe he can convince her to let him play the piano too. She’s a shrewd businesswoman, and negotiating with her makes his blood boil. Damn if she doesn’t make his blood boil in other ways too.
The morning of April 18, 1906, a terrible earthquake buries their dreams beneath the city’s ruins. Can Norah and Mac rebuild their lives? Will rebuilding their dreams bond them forever, or tear them apart?


Their banter is light and frosty at times, but their hearts betray different responses. It’s only when tragedy strikes that they realize how much they need each other. Like all novellas, it’s short, and you’re left wanting to know more. But it was a treat to read about a time period so rarely visited.
- author Maria Zannini
San Francisco Dreams is set around the time of the 1906 earthquake, which devastated San Francisco. Ms. Masters does an excellent job of creating an enjoyable story about a woman struggling to make a place for herself in a male-dominated world and a man looking to enjoy life to its fullest. The earthquake, as well as a kidnapping scene, add a depth to the story that takes it beyond just a romance.
- reader Michele Smith - 4 stars

Casting Call: See who Cate envisioned in these roles while writing.
Excerpt
Nixing her usual jaunty step, she strolled ladylike – well, as ladylike as she’d ever managed – onto the walkway. Damn this rain. The one snag in her plan to escape this dreary city. She skittered under the shop overhangs until she reached Amos’ Dry Goods. A book would keep her company on the train ride west.
A copy of Mark Twain’s Following the Equator drew her to the book shelf. The dollar price outraged her, but Mr. Samuel Clemons was her favorite author, so she’d buy it. The dang book wouldn’t fit in this tiny silk purse. The price of femininity, she allowed, tucking the book under her arm.
The sight of a man outside the window jolted her to a halt. His piercing stare pricked her skin like sleet on a summer’s day. Though a stranger, he watched her as if he knew what she was thinking. Despite her fancy clothes, she could swear he saw through to her very bones with those eyes. Beautiful, blue eyes. They burned with such fire, her skin near ignited from the heat. Framed by smooth, dark locks that curled to his collar, his stare burned into her like a branding iron, leaving an indelible mark. Then, with one flick of his brow, he set his cap at a rakish angle and turned away. Dismissed her, just like that.
Anger burned her cheeks. How dare he! He knew nothing about her, yet he treated her no better than the riffraff in this awful town had all her life. Good thing he was leaving, or she’d give him a good snub.
His gait purposeful yet slow, he walked away with the bearing of a king—or a predator, all wild energy contained within rippling muscles, ready to spring. She pitied any prey he set his sights on. Lucky for her she wouldn’t have to see him again. Unless the train passed him, then maybe she’d wave her lace handkerchief out the window at him.
Passing the candy counter, she palmed a few licorice and peppermint sticks, and deftly slid them into her purse. Not too small for those.
Her eye caught a familiar figure approaching. Mrs. Hathaway, the snake-tongued biddy. In passing, Norah bumped her shoulder hard into the matronly woman’s.
Mrs. Hathaway gasped. “Oh my. I’m very sorry. I hope I didn’t muss your dress. It’s so beautif—” Meeting Norah’s cool appraisal, Mrs. Hathaway hissed, “You.”
“Dear me. I do apologize.” For not doing this years ago.
“Finery can’t disguise a…” Mrs. Hathaway whispered the last. “…hussy.”
“Mm.” Norah slowly scanned the woman’s barrel-like form. “Why Martha, for once, I do believe you’re right. Honestly, a woman of your age shouldn’t wear rouge.”
The biddy resembled a chicken that had lost its squawk. “Why, I never.”
Norah leaned close. “That’s not what I heard. But then, you of all people, know how untrustworthy gossips can be.”
When Mrs. Hathaway swooned, Norah caught her. “There there. Someone fetch a glass of water for this poor dear. Unless you prefer whiskey, as the rumors allow.”
Mrs. Hathaway snapped straight. With an indignant huff, she stomped off.
With a shrug, Norah flashed her sweetest smile at the dispersing crowd. “It appears she’s fine after all.” A little lighter in the purse, but the biddy needed to lose a little weight anyway. Norah was more than happy to oblige, after all the good turns Mrs. Hathaway had done for her.
Her conscience niggled at her when she noticed the stranger watching her again through the shop window. Had he seen the crime? Her heart lurched. If he reported it, the sheriff would arrest her, and she’d miss the train.
Lifting her chin, she silently dared him to challenge her. The letter in her purse gave her the strength to face nearly anything now.