Hi David! So glad to have you at Author Chat, where we can learn a little bit about you, and your book.

Thank you. It’s a pleasure to be here and looking forward to the rest of the interview.

Grab a cappuccino and let’s chat. Unless you have another favorite drink (alcoholic or otherwise)?

Usually a cup of tea during the day but if it’s the evening a coke and whisky usually suffices. 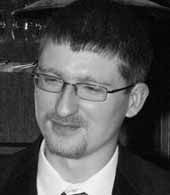 Tea's a necessity for me too. Fur or feathers, petwise?
My wife and I own six cats so I’ll say fur.

Any pet peeves? One thing that really burns your biscuits?
Pets that don’t do as they’re told. Unfortunately, all six of our cats are guilty of this, at least once every hour, probably more to be honest!

My furry kids never listen either. :) Favorite quote?
Einstein on Gandhi: “Generations to come will scarce believe that such a one as this, ever in flesh and blood, walked upon this earth.” 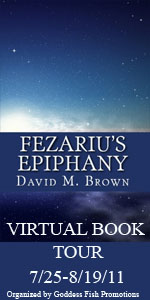 What’s your ideal day like?
I’ll awake mid-morning and not feel tired, the cats will be on their best behavior, my wife, Donna, will be with me and I’ll get plenty of writing done before spending some quality time with my family, maybe grab a takeaway and a have a few drinks in the evening, staying up late watching a film or comedies. That sounds a pretty good day.

It certainly does. If you could live out any fantasy, what would you do?
I would probably just wander the world and not have to worry about money or other commitments when doing so. I enjoy fantasy fiction tales with adventurers travelling across their respective worlds but in the real world there is so much I would like to see and I just don’t think there are enough years in the average life to do it all!

That sounds wonderful as well. Beethoven, Beatles, Foo Fighters or Keith Urban?
It has to be the Beatles. They’re not my favourite group, but their influence on music is without question and what they achieved in such a short space of time is incredible. Many groups since have had one or two outstanding talents but the Beatles had a quartet of gifted musicians who each branched out into solo careers though poor Ringo didn’t fare as well as the others! 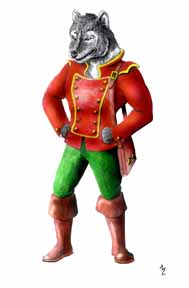 Do you have a music playlist for your book?
I don’t have a playlist as such. I like listening to the likes of The Decemberists, Nirvana, Guns ‘N’ Roses when I’m writing. Music by zero-project was used in the trailer for Fezariu’s Epiphany and also adorns my website.

Which of your characters would you most/least to invite to dinner, and why?
I’d most like to invite the very talkative toldere, Vintaro, who loves alcohol and a spot of humour. We’d get along famously. I’d least enjoy the company of the misogynist, Vincent Birchill, the sort of man I utterly despise.

While creating your books, what was one of the most surprising things you learned?
I owe thanks to my wife, Donna, for this really as she is my no.1 critic. When she fed back about Fezariu’s Epiphany it was often citing issues with overlong sentences which were too flowery in the use of language. I had mistakenly assumed with some sentences that reeling off two or three lines was better than just keeping it simple and concise. I’ve certainly learned my lesson now! 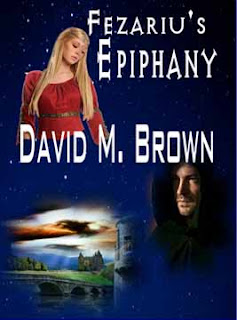 Lucky you to have such a spouse! Where can readers find out more about you?
You can find me on Twitter (@elenchera) and Facebook (http://www.facebook.com/fezariu), I have a website elenchera.com and a regular blog, The World According to Dave (http://blog.elenchera.com)

Please share a book blurb and/or excerpt from Fezariu's Epiphany.
Short Blurb
The White Oak, Clarendon’s oldest brothel, lured and destroyed men by the thousands. Fezariu was different. He had never been drawn by the White Oak’s vices but the brothel had still ruined him when he was just a boy.


Salvation came in the form of the Merelax Mercenaries – Elenchera’s most prestigious hired hands. They gave Fezariu the chance to escape from his past. Immersed in the world of dangerous assignments in the colonies Fezariu longed to forget everything about his childhood but only in facing the past would he ever be free of it.
Excerpt 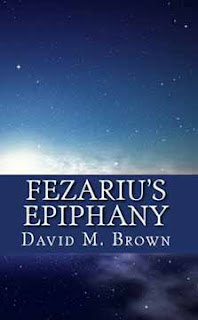 When it came Fezariu leapt over the barrels and was flanked by Arshea and Vintaro with the other mercenaries holding a disciplined line on either side of him. They ran through the smoke rising from the flames and clouds of dust from the debris and soon found themselves in the pandemonium of the conflict raging throughout the square.


Across the expanse were hundreds of valkayan rebels engaged in an epic tussle with the colonists. Fezariu’s charge of Merelax Mercenaries smashed into the side of the closely packed valkayans who were already in disarray from the showers of arrows raining down on them from General Bayard’s archers. When the last of the bow strings came to rest the fate of Redemption was left to be decided by those fighting in the central square.


Fezariu’s line of mercenaries remained unbroken but many had fallen to the stubborn valkayan rebels whose determination was not swayed by the wilting of their numbers. Gradually the valkayans began to seize the advantage and when Fezariu’s line was broken carnage reigned throughout the central square with victory and defeat very much in the balance for all concerned.


The failing of Fezariu’s line bred indiscipline amongst the mercenaries who broke formation and engaged in their own personal struggles. Fezariu remained close to Arshea and Vintaro with the trio repelling attacks with ease and providing cover for each other from any surprise ambush. The rebels’ resolve continued though and at the next explosion it appeared all hope of defending the city would be lost.
Amazon: http://www.amazon.com/Fezarius-Epiphany-ebook/dp/B00515BM9W
Thanks for chatting, David! Best of luck to you.
Readers, David will be giving away a $25 Amazon gift card during his tour, so be sure to follow along and comment! The more comments, the better your chance of winning.

Thank you so much for inviting me to chat. And I have to say, this is a beautiful blog so I'm glad to be hanging out here!

Welcome David! And thanks for the lovely compliment.
Your cover's so striking, I love it.

From the bit you wrote about you book, it sounds really good. I must read itmom1248(at)att(dot)net

I really enjoyed reading this interview! I am looking forward to reading your book, David!