Betting It All, historical romance 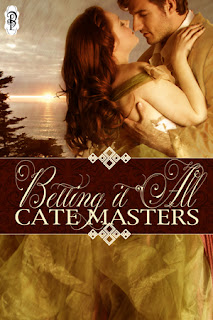 Betting It All
Historical romance novella
About 30k
Decadent Publishing

Norah Hawkins wants a new life as far from her old one as possible, but where can she ever find that chance? When a letter arrives promising her the deed to property in San Francisco, Norah packs her bags and flees the broken shards of her troubled past.
With its anything-goes atmosphere, 1906 San Francisco suits Irishman Gerard MacKenzie just fine. He loves tending bar in Norah’s saloon, and verbally sparring with the shrewd businesswoman for more privileges and work. Her beauty, wit and sass make his blood boil with need.
But disaster looms over their promising new lives when a terrible earthquake buries their dreams and threatens to shatter their future. Norah and Mac must rebuild their lives from the ruins and they’ll need each other more than ever, but can their ties to each other save them or tear them apart?


Sweet, romantic and exciting, I read this book in one sitting as I couldn't put it down. I loved Norah's determination to go it alone, but when she gives in to the strength and safety she could have in Gerard's arms, the love they share is even more captivating.
All Romance Ebooks - Recommended Read 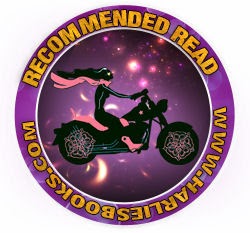 I don’t want to give too much in the way that I liked how Ms. Masters plotted her story but I will say that it flowed and I got caught up in everything that Mac and Norah were doing to build something great and also watching them go from friends/boss/employee to lovers.  The tent camp scenes were heartbreaking knowing that the camps were real.  Those scenes added an authencity to the story and made it much more layered.
The end scenes were some of the best in the book.  Secrets from Norah’s past are revealed and they are sweet to say the least.  I will have to say that while I loved the book, I want more of Mac’s and Norah’s story.  I know that authors don’t like to hear that too much, but I would.  Did they make it in the aftermath?  Did true love prevail?  In mind they did but I completely fell in love with this book and its characters.  And you will too.
Harlie's Book Reviews - 5 Harlies and a Recommended Read


Casting Call
Who starred in the movie version in my head? View the Casting Call here.

Excerpt
Guilt filled her as she sealed the envelope. Her first letter should have been to her mother. Estelle probably forgot I left. More likely, she bought a bottle and forgot everything, period.
Downstairs in the hotel lobby, Mac stepped around the corner into her path. “A letter to your beau?”
She bristled. “No.”
Leering, he nodded. “Ah. You left him behind.”
“Certainly not.” My, but he cleaned up nicely. The electric wall sconce gave his black hair a sheen like raven’s feathers in the sun. His smooth-shaved skin accentuated the whites of his eyes, rimmed with thick dark lashes. Curled in a teasing smile, his lips appeared soft, not weather-worn like some men.
He cocked a brow. “He’s joining you later?”
“I don’t see how it’s any of your concern.” Unless he still hoped for employment. His long, smooth fingers might be handy for more than cards. Still, if she wanted music, she could buy a player piano and not have to pay it a weekly salary. Though it wouldn’t be nearly as nice to look at as Mac.
He shrugged. “It isn’t. Unless you run into debt playing poker. I want to be assured someone will back you up.”
“You needn’t worry. I never get in over my head.” In anything.
He tipped his cap. “Smart woman.”
Not enough to fool him. Last night, Norah had imitated her drunken mother to perfection, another skill that came in handy. Believing her vulnerable, the men made themselves moreso. Not Mac. He’d grown more careful, as if he guessed at her intent.
“What are you doing here?” She wondered what sort of a racket he ran. Everyone had one. Uppity ladies in their lace-edged gowns and mansions excelled at scamming men into marriage, but only succeeded in trapping themselves in the bargain. She preferred a prison with bars.
“Renting a room,” he said, “the same as you.”
Coincidence? Or had he followed her? “I’m curious. Do you possess other skills?”
Smiling, he tugged at his jacket lapels. “I’m a man of many talents. Why do you ask?”
Lo, his ego reared again. “Have you no real trade to ply?”
“Playing the piano is a ‘real’ trade, Miss Hawkins. However, I can work at almost anything, from carpenter to barkeep.”
Like Dan. All her stinging retorts vanished. “Oh.”
He grimaced. “You disapprove?”
“Not at all. Those are honorable trades.” Why should she feel relieved?
“As honorable as your own?”
What was he hinting at? Did he know about Estelle? Her face flushed hot. Pointedly, she said, “Yes, as honorable as owning a saloon.”
“Saloon,” he repeated, as if unsure. “I thought it was a gentleman’s club.”
Did he mean to imply she’d employ herself in some other occupation, such as her mother’s? In defiance, she curbed her tongue, unwilling to satisfy him with an answer.

Excerpt 2
Lord, she must have left her common sense in New Jersey. A man like Mac would prove to be nothing but trouble. Mischief twinkled in his eyes. Back in her hotel room to repack her scant belongings, Norah felt it in her bones. Deeper than your bones, a small voice told her. She felt it in a way unfamiliar to her. It rattled her nerves. It turned her thoughts to him at the most inconvenient times, wondering what sort of man Gerard McKenzie truly was beneath his sharp tongue and wily ways. It robbed her of common sense and self-control, inventing ways to stay near him. When he’d practically insisted she hire him, the thrill running through her both startled and intrigued her. No man had so much as laid a finger on her, not with her permission anyway. Yet she found herself imagining what Mac’s touch might feel like.
In the hallway, he whistled Melody of Love. She imagined him singing the lyrics:
Hold me in your arms, dear
Dream with me
Cradled by your kisses, tenderly
While a choir of angels from above
Sings our melody of love.
What must it be like, to know such a deep love? To trust a man with her heart?
A small laugh burst forth. If she’d learned anything in her twenty-five years, it was that men couldn’t be trusted. Especially not with a woman’s heart. The only time she’d given in to curiosity and let her heart rule over her head left her burning with shame. The thrill of Floyd Enders’s attentions turned to surprise when his fluttering kiss grew forceful, his groping desperate as he pinned her to the ground. Another attempt to prove her cut from the same cloth as Estelle, another whore to be used at his whim and tossed aside.
A bitter chuckle escaped. She’d done the tossing instead, and her kick to his hard groin left him writhing in agony. Too bad it wasn’t the lasting kind of pain, like he’d inflicted on her, claiming she’d begged for it. His lie followed her for years on the whispering lips of other boys who wanted what Floyd supposedly had.
Would Mac treat her so poorly? Of course not. She’d provide him with wages. If she wasn’t careful, he’d woo more from her, and soon she’d have less than nothing. No money, no saloon and worst, a ruined reputation. No man would rob her of that.
She lifted her bag, then thought better of it. Let Mac learn right away to take orders from her. After setting it on the bed, she put on her hat and opened the door.
Mac leaned his shoulder against the wall, one leg crossed over the other, aimlessly twirling his tweed cap in his hands. Glancing up, he straightened and scrunched the cap.
At least he pretended seriousness. “Please get my bags.”
He flashed a smile and winked. “Yes ma’am.”
A more fragile female might be devastated by his charms. Oh, she hoped this wouldn’t turn out to be a terrible mistake.
Hoisting one bag under his arm, he grabbed the handle of the remaining one. “All set.”
“Excellent.” She led the way downstairs, stopping at the front desk to check out and settle her account. Outside, she found Mac wearing his cap and a smile.
The bustle of the busy street made her hurry in excitement. “I wish I had time to explore the city.”
“It’s something, isn’t it? Makes me feel more alive.”
Slowing her pace, she glanced over. “Yes. Exactly.” She couldn’t hide her surprise at sharing that feeling. “Once I make my success, I’ll indulge my curiosity. Until then, I have too much work ahead.” She hurried on.
He fell into easy step with her. “There’s always time for work. My mama always said it’s more important to take time to celebrate.”
“Celebrate what?”
“Life.” He said it as if she should have known the answer.
Funny, she’d never shared that inclination. Life presented too many challenges, too many obstacles she had to scrabble over. “

Congrats! What a great cover! The excerpts are intriguing and I hope Kate and Mac are able to build things back up together. :) Best of luck!
~Stephanie

Thanks so much, Alex and Stephanie!

Glad you liked the excerpts, Stephanie. :)