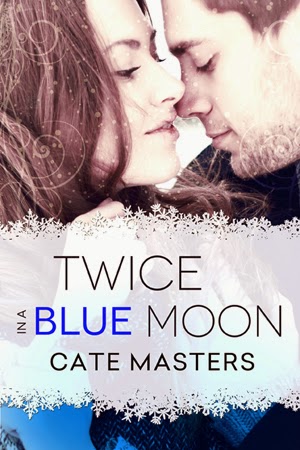 Twice In A Blue Moon

Casting Call  Who did Cate imagine as these characters? Find out here.


The setting in Twice in a Blue Moon really got me - I soooo want to go see the Ice Hotel and the Northern Lights now.  The whole arctic wilderness was a fantastic setting for this romance.  Both characters love the wilderness - but for different reasons.  They thrive under very physical conditions.

How you can you not love sleigh dogs?  A few of them even had a very distinctive personality.  It was fun to see them worked into the story (along with a couple of real life reindeer).
Jasmyn at Bitten by Romance – 4 stars
http://www.bittenbyromance.com/2014/12/arc-review-twice-in-blue-moon-by-cate.html

The story is a great read. It is fun, it is romantic, it is moving. I’m just sorry that it was so short, I would have loved to have been lost in it for another couple of days.
I believe you will enjoy it.
Dan Curnett – 5 stars https://www.goodreads.com/review/show/1136611948?book_show_action=true&page=1

I loved how deep Masters ventured into the minds of the two main characters. Not only were the chapters being written from their personal perspectives very fun and amusing to follow but they also added a very personal touch. I loved that, just for that I would be willing to read more of the author’s works.
Maria - 4 stars


Twice in a Blue Moon was a satisfying and enjoyable read. The cover alone is very tempting. This story was very well written and the characters were well developed. Speaking of the characters Melanie and Buck, made for interesting reads. They both have baggage and once you get to know them, you will adore them. This is a good romantic read for those winter nights. No explicit sex in this book, which I thought was refreshing. It didn't need it, for me to feel a connection between the characters. Overall a good read!
Jennifer - 4 stars
https://www.goodreads.com/review/show/1139227317?book_show_action=true&page=1


I really liked this book! It had a unique setting and a hero with a lot of baggage.
JoMarie - 4 stars
https://www.goodreads.com/review/show/1134787275?book_show_action=false&page=1

Excerpt
Buck tried not to drool. “Perfect.” He loved making new friends, especially of the female variety. So long as they didn’t complain about his modus operandus: all fun, zero ties. Repeats happened if the girl abided the rules. And if he didn’t get too attached. Such foolishness led to all manner of drama and heartache. He’d had enough of both. His life had become about survival, and he’d taught himself not to let anyone get close. Not to make himself vulnerable to pain. To live alone and like it.
Klaus set two mugs in front of them and deftly removed a bill from the stack Buck had left on the bar.
Something made him glance up at the television. Maybe Kenny had implanted a subliminal suggestion during their conversation. Damn if the name at the bottom of the screen didn’t read Melanie Michaels. A man spoke into a microphone, then stepped closer to hold it near her.
“No way. That’s her?” He waved at the bartender. “Turn up the volume, will you please, Klaus?”
The camera zoomed in on her face. Features delicate but strong, beautiful but serious. God, that mouth—lips full and wide, and the way they moved as she spoke, he could hardly tear away his gaze. Her large eyes, dark and luminous in the way that had always struck him to the bone. Just like Poppy. She’d turned out to be anything but sweet. More like poisonous, the opium behind the flowery facade an instant addiction that took him years to overcome. He still carried the scars from her acid nectar. Anything and anyone reminding him of his former lover ranked the lowest of low on his shit list.
Melanie Michaels just claimed that spot.
And now he’d have to deal with her every day for almost a week. “Oh man, it’s going to be a grueling six days.” Five, technically. Tomorrow’s meet-and-greet was strictly a formality, though the preliminaries helped him size up his guests so he could better prepare.
Klaus glanced from Buck to the screen and back again. “She’s taking your tour? You lucky bastard.”
Lucky? No. Bastard? Yes, according to some. “Oh yeah. Skol.” He raised his mug and gulped. And gulped.
The blonde assessed him. “You’re a wilderness guide? For which company?”
He tried to sound proud and manly as he said, “Arctic Adventures.”
“I’ve heard about them.” An arch of her brows, and her demeanor turned glacier-cold.
He could only imagine what, exactly, she’d heard. Kenny insisted they stretch their expenses as far as possible. Translation: second-rate accommodations. And hey, it wasn’t his fault if the sled dogs took a dislike to certain clients. They should know better than to leave unpackaged foods unprotected and stow their backpacks away from the team. The dogs had few enough trees upon which to relieve themselves, and he didn’t blame them one bit.
Klaus shot the blonde a dubious, don’t-make-trouble look.
“What? They’ll be famous.” She hid a laugh behind her hand. “No Boundaries will make you a star in America.”
“America.” Ah, hell. Why hadn’t it occurred to him? His family would see him, the friends he’d left behind. And Poppy. Shit. Short of them traveling to Sweden, there’d been no way for any of them to bust him on the lie he’d told. Now they’d know he didn’t work for the prestigious National Geographic tours, but a crap company based in Kiruna. In his last email, he’d boasted of almost having saved enough money to build a log resort better than the world-famous Wilderness Lodge. Fat chance, on his salary.
Me, a star? More like an outcast. Buck heaved a sigh. “I’ve suddenly lost my appetite.” For drinking or anything else.
He grabbed the cash from the bar, left a generous tip, and nodded goodbye to Klaus. He strode to the exit, ignoring the blonde’s taunting calls to come back. The laughter in her lilting tone churned his gut.
Whether he returned to the job at all depended on how badly Melanie Michaels and crew shamed him on video. He’d spend the next six days avoiding the camera, and afterward, crawl into some isolated igloo a dismal failure. He might stay there until global warming melted away the polar ice cap.